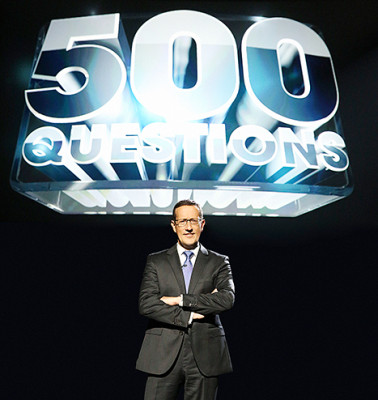 The innovative event game show “500 Questions,” from Mark Burnett and Mike Darnell, has been picked up for a second season by the ABC Television Network. Produced by United Artists Media Group in association with Warner Horizon Television, the series will return in 2016.

Season one of “500 Questions” aired in May 2015 as a multi-night primetime event. A standout summer performer for the network, the show delivered consistent ratings throughout its run, with the season finale providing ABC’s best summer entertainment performance in its Thursday time period in two years.

Mike Darnell said: “When we created ‘500 Questions,’ our hope was to bring the event game show back to primetime. Thanks to ABC, we had a great summer run and achieved that goal. We are excited that the show is coming back for a second season.”

Mark Burnett said: “I am so glad we are back; I love this game show event. To win, these geniuses need both brains and endurance as they tackle television’s toughest questions.”

“500 Questions” challenges the smartest people in the country to achieve the seemingly impossible task of answering 500 of the most difficult general knowledge questions ever devised. There’s only one simple rule: never get three wrong in a row — or you’re gone. No saves, no helps, no multiple choice, “500 Questions” keeps you on the edge of your seat to see if any of these geniuses can do it. It is the ultimate test, where intellect, strategy and stamina are all equally essential in order to win.