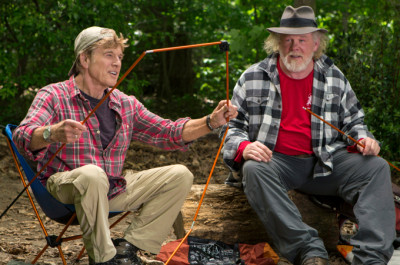 “A Walk in the Woods.” (Frank Masi, SMPSP/Broad Green Pictures via AP)

After a couple of horrifically funny incidents – a morning show interview with an obliviously idiotic interview; a funeral at which he says exactly the wrong things – author Bill Bryson decides that life is just too short to not get out there and do something. The something he hits upon is hiking the Appalachian Trail, 2100 miles of pristine wilderness. His lovely English wife (Emma Thompson) is not exactly amused.

After fruitlessly attempting to persuade friends to go with him (the responses, distilled to their essence, is ‘At our age? What are you, nuts?’), he gets a call from an old friend he hasn’t seen in decades, Stephen Katz (Nolte) – who really wants to go with him.

When the Bryson’s meet Katz at the airport, they are pretty much appalled by the condition he’s in. To say he’s in… precarious shape… would be generous. But the two get their equipment (sold by a spec pouting super-salesman played by Nick Offerman) and set out.

In the ensuing several months, they are overwhelmed by the natural beauty along the way and face unexpected problems. I’m not sure which is worse – Mary Ellen (Kristen Schaal) the world’s most annoying hiker, or the bears – but an accident that leaves them stranded on a ledge pondering their demise is possibly the most daunting.

Well, except, maybe, the husband of a woman Katz hits on in a stopover – where Jeannie, a pretty motel owner (Mary Steenburgen), takes an unrequited shine to Bryson. Jeannie’s mom (Mimi Gould) steals her few minutes on screen in a sequence that’s both hilarious and poignant.

If twice counts as a running gag, then Bryson and Katz’s two encounters with a couple of young hikers (Andrew Vogel, Derek Krantz) would be one of the better ones I’ve seen in a while.

Directed by Ken Kwapis (About a Boy, The Sisterhood of the Traveling Pants) and beautifully shot by John Bailey (The Big Chill, As Good As It Gets) from a script by Rick Kerb and Bill Holderman, A Walk in the Woods is a mostly light-hearted showcase of two masterful actors bouncing off each other. It looks great, the laughs are plentiful and balanced by just enough poignancy and all concerned know when to get off the stage.

A Walk in the Woods is, simply put, a good time at the movies. It doesn’t want to be anything more.