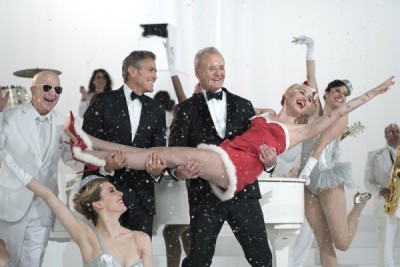 The hour opens with Murray in his hotel room at The Carlyle Hotel where he’s being badgered by the producers (Amy Poehler, Julie White) of the Christmas special he’s supposed to do. Problem is, none of his guests have showed up and only part of the crew because of the worst blizzard in forever. His poignant Christmas Blues reminds us that, when all kidding is left to the side, the guy can sing.

But, despite the weather and being accosted by an obnoxious would be manager (Michael Cera), Murray soldiers on. He tries to get someone to sing, but the Maître ‘D (Dmitri Dimitry), a waiter (David Johannson) and other hotel employees turn out to be less than wonderful vocalists. It takes four chefs (Phoenix) – whose preparation of a feast for a wedding reception will be wasted because the power’s gone out – to put together an actual song.

Then there’s the bride-that-was-to-be (Rashida Jones), a single woman in a white stole (Maya Rudolph), a waitress (Jenny Lewis) and, Elliot (Jason Schwarzman), the groom-that-was-to-be, who all come together to get a little Christmas spirit cooking – before Murray passes out and has a dream about what the special should have been.

Through it all, Murray’s loyal pianist, Paul Shaffer, provides accompaniment.

In the hotel bar, the highlights include Murray and passerby Chris Rock singing Do You Hear What I hear; Lewis and Murray doing Baby It’s Cold Outside, Schwarzman and Jones leading off I Saw The Light and Rudolph belting out a very Motown Baby Please come Home (I knew she could sing, but… WOW!).

Johannson, Lewis and the lingerers in the bar also do a lovely version of The Pogues’ Fairytale in New York (don’t worry, they edit out the profanity-laced verses so it’s family friendly).

Up until the point where Murray faints, A Very Murray Christmas has a loose, we’re-makin’-it-up-as-we-go feel that plays to his strengths as an improviser. It’s funny, witty and poignant.

Then the dream special kicks in and things get very slick, very bright and very professional – yet outside of losing the melancholy for a bit, it still feels pretty loose because Murray is Murray and no matter how slick and professional everyone else is (except for George Clooney, who gets to goof a bit on Santa Claus Wants Some Lovin’), Murray is always Murray.

The highlight of the dream special is Miley Cyrus. She does a duet with Murray and absolutely owns Silent Night in her solo spot – you can hear the country and gospel in her background and it’s quite beautiful.

If there’s any justice, A Very Murray Christmas will become one of those annual events we all watch and silently mouth all the songs and dialogue as they’re being performed. It’s a lovely hour.