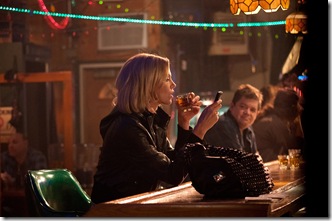 Mavis Gary [Charlize Theron] is a thirty-seven year old ghost writer of a series of young adult novels that has just been canceled – in fact, she’s got a week to turn in at least a draft of the last one. From the look of her condo in Minneapolis – which looks like a tornado hit it – it would seem that Mavis is something of a procrastinator and a slob.

When she gets an e-mail announcing the birth of a daughter to her high school boyfriend, Buddy Slade [Patrick Wilson], she decides that the last time she was really happy and that she should head back to Mercury, Minnesota and rekindle that romance – never mind that Buddy is happily married and has that newborn daughter!

So, she packs up a bunch of stuff [throwing in a suitcase] and stuffs her yappy little dog [named Dolce!] in her purse. The next thing you know, she’s tooling out of Minneapolis in her Mini Cooper.

When she gets into Mercury, she calls Buddy to ‘catch up.’ She says she’s in town for a real estate deal. At a bar, she runs into Matt Freehauf [Patton Oswalt], whom she kind of knew in high school. Matt was beaten and left for dead by some jocks who thought he was gay – she remembers him as ‘Matt, the Hate Crime Guy!’

When she isn’t trying to steal buddy from Beth [Elizabeth Reaser], she’s getting drunk with Matt [he has a still in his garage and created an eight-year old whisky named after the town of Mos Eisley in Star Wars]. Their conversations are bitter and frank – he’s the only one who has ever called her on her [stuff] – and their relationship, if you want to call it that, may be the only one she’s ever had that is based on honesty. Indeed, the Mavis/Matt relationship is the centerpiece of the film.

Wilson does a fine job as the bemused Buddy – who slowly comes to realize that Mavis is nuts [something Matt figures out the first time they get drunk together]. It doesn’t help that he invites Mavis to his daughter’s christening, but there’s more than meets the eye – only it’s completely misinterpreted by Mavis. Reaser gets the thankless task of playing the loving wife, but gets a couple of moments to shine – most notably in a gig for her band, Nipple Confusion, made of fellow moms, and at the christening.

Collette Wolf steals her few scenes as Matt’s sister, Sandra – a woman who wants, more than anything to get out of Mercury but is probably best served by staying.

Diablo’s script is devastating at times, and more concerned with truth than snappy dialogue. She gets that sometimes people don’t change – and Mavis is not only one of those people, she should be. Reitman deals with the dark, bitter humor of the script deftly. He knows when to be blunt [pretty much every time Matt is speaking] and when not [Buddy and Elizabeth’s slow burn reactions to Mavis’ craziness].

Reitman also gets that this is not the kind of comedy that needs snappy pacing. There are times when things slow down almost agonizingly, but the material is such that you can’t rush it, so he doesn’t.

Young Adult continues the list of quality performances from Patton Oswalt [United States of Tara, Big Fan]. His bitterly honest Matt is the source of some of the film’s darkest, funniest moments – all of which involve Mavis. His chemistry with Theron is palpable, which makes their exchanges funnier – even as they become more cringeworthy.

Young Adult is not only Reitman’s fourth film, it’s his fourth straight terrific film. He really has a knack for picking stories with great, if unusual, characters and bringing those stories to life.