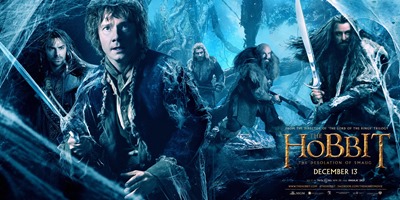 It’s no Return of the King, but The Hobbit: The Desolation of Smaug is a better movie than An Unexpected Journey in virtually every respect.

Yes, The Desolation of Smaug is, in essence, one three-hour chase and, yes, it’s considerably darker in tone than An Unexpected Journey (or the most part of it). Yes it introduces more characters that weren’t in the book (or the TLOTR appendices) and some events are spun from whole cloth. These, however, are Good Things. Even the score is a vast improvement.

Desolation opens with a brief flashback to show what spurred Thorin Oakenshield (Richard Armitage) to make the attempt to win back the dwarves capitol (hint, it was Gandalf…). From there, we’ve got our brotherhood on a journey that takes them through Mirkwood, Lake-Town and, finally, into the city of Erebon – where we meet the titular dragon (Benedict Cumberbatch). 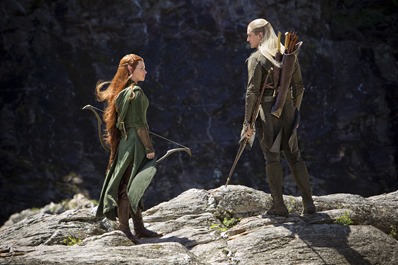 In between that flashback and the face-off with Smaug, our travellers lead a band of orcs to Mirkwood, where we meet the younger Legolas (Orlando Bloom), the captain of the elves’ guard, Tauriel (Evangeline Lilly) and the king of the Silvan Elves, Thranduil (Lee Pace) – a man with an agenda, it would seem.

Purists may well hate Tauriel, but she adds a spark to the proceedings. She’s more reckless than Legolas and, when the weary travellers go from possible guests to definite captives, her interactions with Fili (Dean O’Gorman), it gives a development and gives us an elf who is less pompous ass and more practical warrior.

Meanwhile, Gandalf (Ian McKellen) has gone of his own errands – which lead to direct link to The Lord of the Rings Trilogy – and good bit time with Sylvester McCoy’s Radagast.

Then there’s Lake-Town, a village on stilts, sitting on the lake at the base of the Lonely Mountain. It’s the place where the survivors of Smaug’s destruction the city of Dale fled afterward. Here, our travellers go from possible captives to honored guests – and where we meet Bard (Luke Evans), a man tortured by his ancestors’ failure to stop Smaug.

And finally, there’s the city of the dwarves with its vast trove of treasure – and one very cranky dragon. Although the underground city is dark and gloomy, it’s also majestic and director Peter Jackson renders it with very lovely 3-D.

Throughout, Bilbo Baggins (Martin Freeman) shows courage and resourcefulness – saving his dwarven companions on several occasions – leading to a massive cliffhanger that really couldn’t have come anywhere else.

So, why is Desolation so much better than its predecessor? The writing is tighter (though the film barely fifty pages of novel); the action sequences actually develop the characters (who’d have thought that Bombur, played by Stephen Hunter, would be such a formidable warrior?), and the 3-D is sharper – even in the gloomiest locations.

The visual effects are consistently superb (yes, Smaug is a triumph – though they didn’t need to electronically treat Cumberbatch’s voice quite that much); the new characters fir seamlessly, and Jackson has settled on a tone (no more whiplashing between Hobbit whimsy and LOTR darkness) – which leads directly to the score being better because composer Howard Shore doesn’t have to skip all over the place.

The cast is uniformly excellent – James Nesbitt’s Bofur steals every scene he’s in (without having to resort to overt Three Stooges-is behavior), Evangeline Lilly is a lot of fun (and her stuntwork is very good) and O’Gorman pulls off an arc that is heartbreaking. Freeman and Armitage, of course, get the bulk of screen time and give the film heart enough to spare.

When we got to the cliffhanger after almost three hours, I had a full half of my drink left and to check my watch to make sure the movie was actually that long. All in all, even if it’s the middle part of a trilogy, The Hobbit: The Desolation of Smaug is full value (even without Jackson’s quick cameo at the beginning…).