Taylor Sheridan’s directorial debut – from his own script – is a harsh, breathtakingly beautiful film that a lot to say – but cagily presents it in the guise of a gritty western thriller.

Natalie’s (Kelsey Asbille) death, on an Arapahoe reservation in northern Wyoming, is suspicious enough that the FBI are sent for after tracker/hunter Cory Lambert (Jeremy Renner) finds her body.

Ben (Graham Greene), the reservation’s police chief, acknowledges that he doesn’t have the resources to properly investigate, but is not particularly encouraged by the arrival of young FBI Agent Jane Banner (Elizabeth Olson) – arriving fresh from Las Vegas (she’s the nearest agent to the scene), she isn’t even properly dressed for the harsh Wyoming winter.

Jane is there to decide whether Natalie’s death is a homicide and, if so, get a real investigative team onsite. Unfortunately, while it’s clear that Natalie was raped and murdered, the physical evidence is inconclusive, so if anyone’s going to investigate, it will have to be her. 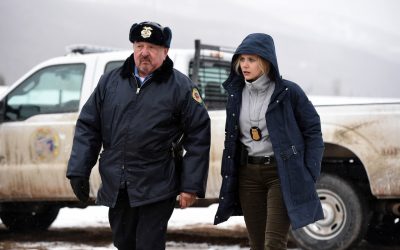 Fortunately, Cory – who describes his job her as ‘I kill predators’ – is easily drafted to help. He’s a friend of the family and Natalie was best friends with his daughter.

The investigation will lead to a particularly bloody climax that I, for one, did not see coming – but while this smartly written and beautifully directed film satisfies the requirements of a gritty thriller, that’s only one reason to see it.

There are scenes that speak to the treatment of Native Americans – and the way they’ve frequently become so inured to that treatment – that are poignant to the point of heartbreaking.

When Jane and Cory notify Natalie’s father, Martin (Gil Birmingham), about her death, he presents the stereotypical stoic Indian to Jane, while having a completely different reaction once she is no longer present. (I would love to see some awards buzz for Birmingham. He only has a couple of scenes, but they are so powerful that they stick with you long after you’ve left the theater.)

A bunch of perennial bad boys on the rez live in a couple of trashed mobile homes jammed together and react to Jane and Cory with derision and potential violence. One, Natalie’s brother Chip (Martin Sensmeier) refuses to believe Natalie’s dead at first, then laments the state of his life and anguish at the news.

These scenes are awkward to describe, but Sheridan’s treatment of them is so real that it’s difficult not to tear up as they play out. 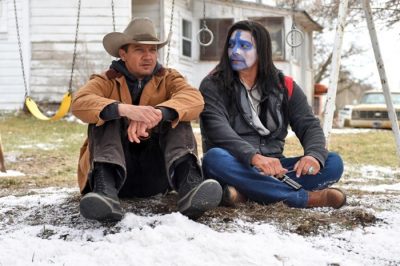 A potential lead turns out badly and the discovery of who did it is abrupt and violent and almost entirely accidental.

Sheridan’s directorial debut shows him to be a thoughtful, open director – he gives us a sense of scale early on with Natalie running in a vast, snow-covered plain, and taking us into nearby mountains where the lush forest and even more stretches of snow are juxtaposed with the tiny reservation and another key site that is even smaller.

He could be accused of cultural appropriation if Cory had had another backstory. The one he’s given makes his behavior – and his philosophy – very natural and profound. And Renner gives the kind of deliberate, thoughtful performance that makes us believe him.

Jane is pretty much in over her head from the git-go, but she’s smart and pays attention. She matches Cory in intelligence and determination –though the look on her face when she learns that she’s ‘not in the land of backup’ shows us that while she might adapt, it won’t be easy. Olson proves, once again, that she is a mighty talent with an incredible range.

Wind River could easily have been humorless, but Sheridan was smart enough to bring in a brilliant cast and give actors like Greene some good lines to break up tension before cranking it up again.

Now that Wind River is expanding its release range, I hope more people see it. It’s a harrowing and breathtakingly beautiful film.