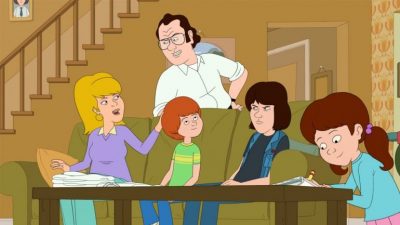 F is for Family follows the Murphy family in the 1970s, a time when you could smack your kid, smoke inside and bring a gun to the airport.

Season Two premieres on Netflix on May 30th.

WELCOME THE F BACK

Season 1 of the original, animated comedy series F is for Family premiered December 18, 2015, featuring the voices of Bill Burr, Laura Dern, Justin Long, Debi Derryberry and Haley Reinhart as the Murphy family, along with Sam Rockwell, as the swinging neighbor Vic. The Murphy family returns for Season 2 along with the voices of Mo Collins, David Koechner, Allison Janney, Michael Kenneth Williams, and Travis Mills as guests.

F is for Family was created by Bill Burr and Emmy? award-winner Michael Price (The Simpsons) and follows the Murphy family in the 1970s, a time when you could smack your kid, smoke inside and bring a gun to the airport. Burr voices the frustrated patriarch Frank Murphy; Dern, Frank’s wife Sue; Long, the teenage son Kevin; Reinhart, the younger son Bill; Derryberry, the daughter Maureen; and Rockwell, the swinging single next-door neighbor Vic.

Season 2 finds the Murphy’s dealing with the aftershock of Frank’s firing and Frank bemoaning the loss of his breadwinner status. Sue joins the workforce to keep the family afloat and comes face-to-face with sexism of the 70s. Meanwhile, the Murphy kids embark on journeys of their own—from rock stardom and sex, to Honeybee Scouts and paper routes. Neighbor Vic also finds himself in love with his latest squeeze Cutie Pie (Collins).