Following the Prisoner model, if Burke (Matt Dillon) is no. 6, then Sheriff Arnold Pope must be No. 2 – but that model breaks down when you factor in chipper/menacing Nurse Pam (Melissa Leo), seemingly the only regular employee of the Wayward Pines hospital (who seems to think Burke needs brain surgery following his ‘accident’).

Following the Lost model, Burke is stuck on an island of civilization in the mountains, but the model breaks down when it becomes clear that there is nothing mystical about Wayward Pines. The same thing is true in regard to the Twin Peaks model – though some of Wayward Pines’ inhabitants are indeed a bit eccentric. 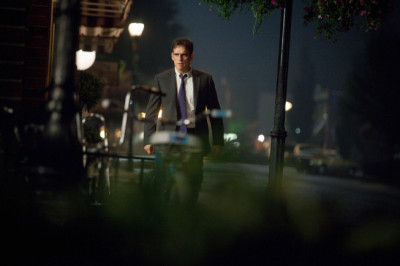 For a time, the show cuts back and forth between Burke, in Wayward Pines, and his wife, Theresa (Shannyn Sossamon) and son, Ben (Charlie Tahan) back home. There’s a character who moves between the town and the Secret Service’s Seattle office, Dr. Jenkins (Toby Jones) – and he clearly has something to do with Burke being in Wayward Pines.

As Burke gets to know people in town – bartender Beverly Brown (Juliette Lewis), Sheriff Pope, Dr. Jenkins – and finds one of the missing agents, Kate Hewson (Carla Gugino) – he discovers something disconcerting: Beverly came to town in 1989 and has been there for a year, while Kate, who has been missing for five weeks, has been there for twelve years and married for the last eight. Then there’s the rules – and the surveillance…

Things get even stranger when Theresa and Ben wind up in town.

Adapted for TV by Chad Hodge from a trilogy of novels (which I had not even heard of) by Blake Crouch, Wayward Pines is full of oddities like those conflicting timelines and the almost completely empty but fully equipped hospital. Things get even stranger when the high school is introduced and we learn of the principal’s previous occupation.

Once the big reveal happens in the fifth episode (the last of those made available for review), some the show’s weirdness and seeming inconsistencies is explained – but not all. Considering that the big reveal takes place in the middle of the season (if ratings are good, the second and third books could provide at least two more seasons), it seems possible that any remaining inconsistencies could yet be explained. 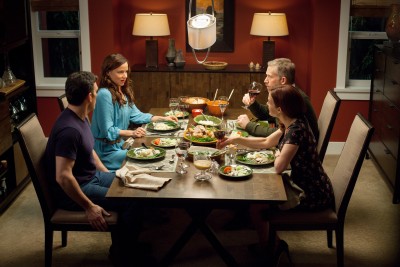 As it is, Wandering Pines starts out seeming to be one genre; shifts to a second in the final scene of the third, and becomes something else again by the fifth – and it works. If you’re looking for something that’s off the beaten path, Wayward Pines may be what you’re looking for.

The writing is strong enough to have drawn Oscar nominees and winners (Dillon, Howard, Jones, Leo and Lewis)) as well as an assortment of extremely talented character actors like Hope Davis (the school’s principal), Reed Diamond (Kate’s husband) and more – and they perform as well as we expect them to.

The premiere, Where Paradise Is Home, was directed by M. Night Shyamalan with an eye to fairly simple setups, cool lighting and framing that doesn’t quite give you a complete picture. He moves things along at a slightly quicker than deliberate pace and plays with mood/tone and develops character nicely.

Shyamalan also helped with some development of the series and is an executive producer. Wayward Pines may be the best thing he’s done since Unbreakable.

Photos by Liane Hentscher/Courtesy of FOX