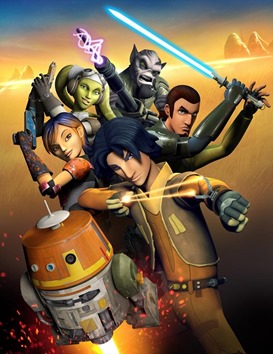 If you love Star Wars and are a verified user of WATCHDisneyXD.com, you will be able to screen the Star Wars Rebels premiere, Spark of Rebellion, beginning on Monday, September 29th; The global premiere of the series will follow on Disney Channels on Friday, October 3rd.

The global television debut of "Star Wars Rebels: Spark of Rebellion" is set for FRIDAY, OCTOBER 3 (9:00 p.m. ET/PT in the U.S.) on Disney Channels around the world, ushering in the series "Star Wars Rebels," beginning MONDAY, OCTOBER 13 (9:00 p.m. ET/PT) on Disney XD. The series will air in 34 languages across 163 countries in over 400 million households.

The television movie garnered rave reviews at last month’s San Diego Comic-Con fan event for its story (set between the events of Star Wars Episodes III and IV) and its look – akin to the classic Star Wars trilogy. The series designs are influenced by the work of original Star Wars concept artist Ralph McQuarrie.

The story unfolds during a dark time when the evil Galactic Empire is tightening its grip of power on the galaxy. Imperial forces have occupied a remote planet and are ruining the lives of its people. The motley but clever crew of the starship Ghost – cowboy Jedi Kanan, ace pilot Hera, street-smart teenager Ezra, the "muscle" Zeb, warrior firebrand Sabine, and cantankerous old astromech droid Chopper – is among a select few who are brave enough to stand against the Empire. Together, they will face threatening new villains, encounter colorful adversaries, embark on thrilling adventures and become heroes with the power to ignite a rebellion.

The multi-platform schedule in the U.S. is:

· "Star Wars Rebels: Spark of Rebellion" one-hour movie will be available to verified users on WATCHDisneyXD.com and the WATCH Disney XD app for smartphones and tablets. It will also be available on Disney Channel SVOD.

· "Star Wars Rebels: Spark of Rebellion" will be available on Disney XD VOD and for purchase through Apple iTunes, Amazon Instant Video and Google Play.

Lucasfilm Ltd., a wholly-owned subsidiary of The Walt Disney Company, is a global leader in film, television and digital entertainment production. In addition to its motion-picture and television production, the company’s activities include visual effects and audio post-production, cutting-edge digital animation, interactive entertainment software, and the management of the global merchandising activities for its entertainment properties, including the legendary STAR WARS and INDIANA JONES franchises. Lucasfilm Ltd. is headquartered in northern California.

Lucasfilm, the Lucasfilm logo, STAR WARS and related properties are trademarks and/or copyrights, in the United States and other countries, of Lucasfilm Ltd. and/or its affiliates. © & TM Lucasfilm Ltd.