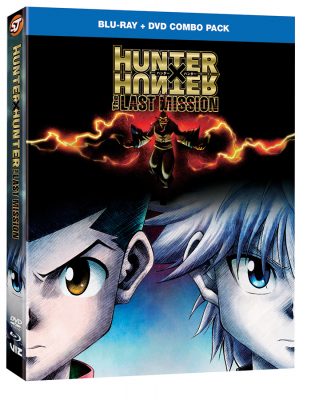 Available in both Blu-ray/DVD Combo Pack (MSRP: $29.98 U.S. / $34.99 CAN) and Standard Edition DVD formats, Hunter x Hunter: The Last Mission will be in stores on March 12th. Details follow.

The HUNTER X HUNTER: THE LAST MISSION was produced by the famed MADHOUSE animation studio and was directed by Keiichiro Kawaguchi. The feature film will be available as a Blu-ray/DVD Combo Pack (MSRP: $29.98 U.S. / $34.99 CAN) and as a Standard Edition DVD (MSRP: $19.98 U.S. / $24.99 CAN). English dubbed and Japanese subtitled dialogue options are included on both formats.

“HUNTER X HUNTER: THE LAST MISSION thrilled audiences earlier this year during its limited U.S. theatrical release,” says Brian Ige, Vice President, Animation. “We’re excited to offer the home media release to HUNTER X HUNTER fans and those who missed out on its run in theaters.”