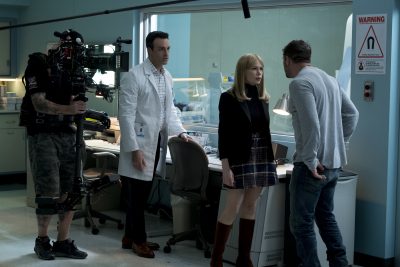 This is a movie that has no idea what it wants to be, but it should have been the R-rated, unfettered monster that was originally announced – not a PG-13 movie that skips genres like hopscotch.
Venom opens with a sci-fi/horror vibe as an independent shuttle crashes to Earth following a garbled transmission that there’s been a breach – one of the astronauts seems to have survived, but we soon see that is not the case.

In the ambulance, the astronaut proves deadly as whatever was keeping them alive moves to a new host – an Asian woman who shuffles away with a broken kneecap piercing her skin. 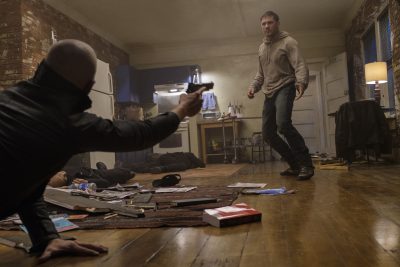 We also get to see that his show enables him to share a rather gorgeous San Francisco walk-up with his fiancée, Ann Weying (Michelle Williams, All the Money in the World) and a cat.

Meanwhile our extraterrestrial entity is moving toward San Francisco.

When we meet Carlton Drake (Riz Ahmed, The Night Of, Rogue One: A Star Wars Story), he’s charming a group of grade schoolers at Drake Biotech – then leaving them Dr. Dora Skirth (Jenny Slate) to take a meeting. A meeting where we learn he’s not the suave good guy we first saw.

In fact, he seems to have some hinky experiments going on that involve… wait for it… extraterrestrial symbiotes! 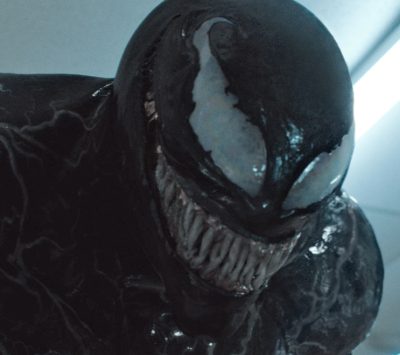 Eddie takes an opportunity to interview Drake but turns it into an attack piece – getting himself and Annie fired (her law firm represents Drake).

When Ahmed orders Dr. Skirth to begin human trials, she sneaks Eddie into the lab and things go sideways as the symbiote she shows him likes him – really likes him – and the chaos and mayhem begin.

So, here’s my biggest problem with Venom: it plays with science fiction, horror, slapstick comedy, romance, melodrama, satire and action – never quite alighting on any one for a sufficient amount of time to establish an identity.

That might work for Deadpool – a character designed to be all those things and none of them at the same time – but for Venom, it makes for a case of Dissociative Identity Disorder. 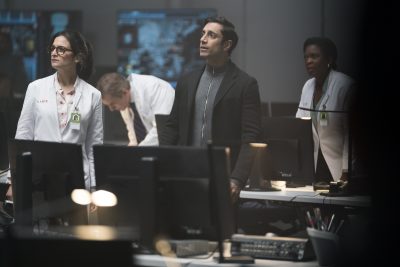 Weirdly, in sequences where Eddie and the symbiote (which calls itself Venom) argue, I was reminded of (of all things) All of My – a comedy starring Steve Martin and Lily Tomlin wherein their characters were forced to share his body (the mere thought of which was more entertaining than Venom: The Movie).

That is, I’m pretty sure, not the reference they were going for.

It doesn’t help that Tom Hardy’s Eddie doesn’t seem nearly bright enough to be an accomplished investigative journalist – and it certainly doesn’t help that the climactic battle between Venom’s and another symbiote (which is white) looks more like licorice and vanilla ice cream being whipped together in a blender.

Ahmed has almost enough charisma to pull off Drake’s villainy, but does a much better job being the smart, charming host to those schoolkids.

You can easily see where an R-rated Venom might have been a better option – Venom’s biting off people’s heads wouldn’t have to be offscreen; the language (which currently pushes the PG-13 limits) could have been more dramatic (shall we say?), and Fleischer could have played the film as a straight sci-fi/horror piece with the appropriate comedy relief (instead of the fluctuating tones of the movie we got).

On the positive side, I can say that director Ruben Fleischer (Zombieworld) keeps things moving so, in spite of everything, Venom is, at least, never boring.

There are two post-credits tags – one, that sets up a potential sequel, is smarter, funnier and more dramatic than anything in the preceding movie, and a long clip from Spider-Man: Into the Spider-Verse that is extremely entertaining.