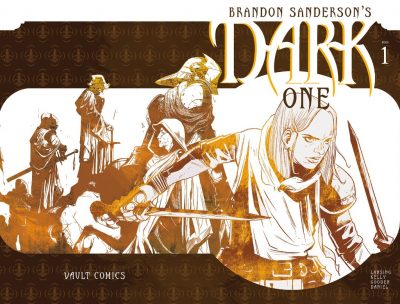 Yesterday, we posted news of a multimedia project (TV, Graphic novel, podcast) from award-winning author Brandon Sanderson called Dark One. Today we have the first art from the graphic novels (there will be two) – from Vault Comics.

Dark One is a fantasy epic about the people caught in a conflict between two worlds: Earth and a dark-and-deadly fantasy realm. The graphic novel will be made concurrently with a TV series that is being produced by FremantleMedia North America (FMNA) and Random House Studio.

The first Dark One graphic novel will be in stores in Spring 2019. Details follow.

Missoula, MT (6/12/2018): Today Vault Comics announced Dark One, a new graphic novel series by Hugo Award-winning author, Brandon Sanderson. Dark One is a fantasy epic about the people caught in a conflict between two worlds: Earth and a dark-and-deadly fantasy realm. The graphic novel will be made concurrently with a TV series that is being produced by FremantleMedia North America (FMNA) and Random House Studio.

Planned as a two-volume graphic novel series, Brandon Sanderson’s Dark One will be co-written by Jackson Lanzing and Collin Kelly (Joyride, Hacktivist). The first volume will be released in the Spring of 2019.

“Dark One is my first project that absolutely didn’t want to be a prose project,” said Brandon Sanderson. “After five false starts, it came to life when I imagined how it would be if the pictures I had in my mind were actual pictures. And then all of a sudden, in a couple weeks, a full and rich outline came together. I’ve since been excited to find the right people to adapt this into the visual story it wanted and needed to be. Vault’s publisher Damian Wassel put together a great team in co-writers Jackson Lanzing and Collin Kelly. I got to meet Jackson and at Emerald City Comic Con and hit it off with both. FremantleMedia and Random House Studio are working simultaneously to bring Dark One to television, so this is going to be something special for me and for my readers.”

“With Brandon’s unique vision as our guiding light, the entire Dark One team is incredibly excited to bring to life a world that will invert and upend everything they expect from the genre, hinging around a character’s journey that will break their heart,” said Collin Kelly.

“Dark One examines what kind of bravery is required to step into your destiny,” said Jackson Lanzing. “It’s a chance to have some sympathy for the devil – and hopefully see in a fresh light the well-worn fantasy tropes.”

Vault Publisher Damian Wassel added, “I’ve been a fan of Brandon Sanderson’s work since the publication of Mistborn, in 2006. I’ve devoured almost everything he has published since, and I remain completely in awe of Sanderson’s scope and vision as a world builder, and his craft as a storyteller. Vault is honored to produce DARK ONE together with Sanderson, and I can promise our readers we will deliver a captivating, beautiful book.”

Brandon Sanderson has worldwide sales approaching 13 million copies and multiple #1 NY Times bestsellers amongst his myriad appearances on the NY Times, Sunday Times of London and other international bestseller lists, making him one of the world’s top-selling fantasy authors. Sanderson’s work has been translated into over thirty-five languages and is best-known for the instant classic Mistborn trilogy, the epic Stormlight Archive, and The Reckoners YA trilogy. The recipient of multiple awards, most notably the Hugo Award for his novella The Emperor’s Soul, Sanderson lives in Utah, where he teaches creative writing at Brigham Young University. Visit him at brandonsanderson.com, and @brandsanderson on Facebook/Twitter/Instagram.

Vault Comics is a private, family-owned company, publishing science fiction and fantasy comics and graphic novels. Vault encourages its creators to break the established order, defy preconceptions of society and identity, and push the boundaries of the medium with bold visions and voices that connect with readers and capture their imaginations. Visit them at vaultcomics.com, and @thevaultcomics on Facebook/Twitter/Instagram.