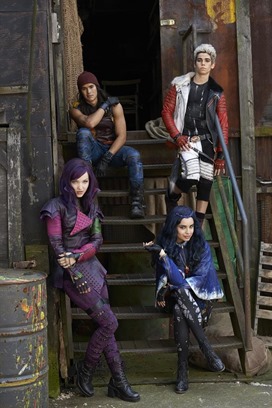 Melissa de la Cruz has been chosen to pen Isle of the Lost, a prequel novel for the Disney Channel’s 2015 original movie, Descendants. Isle of the Lost will feature the teenaged children of such classic Disney villains as Maleficent, Jafar, Cruella de Vil and the Evil Queen and be set on the prison island to which those villains have been exiled. Now, Mal, Evie, Jay and Carlos are coming of age on the island.

Melissa de la Cruz is the bestselling author of such popular series as The Ashleys, Au Pairs and Blue Bloods.

Descendants will premiere on the Disney Channel in 2015. Isle of the Lost will be published by Disney Publishing Worldwide with a release date of May 5, 2015. For more, follow the jump.

New York, NY—July 2, 2014—Disney Publishing Worldwide (DPW) today announced the acquisition of a new book based on the upcoming Disney Channel Original Movie “Descendants,” featuring the teenage children of Disney’s most infamous villains, to be written by bestselling author Melissa de la Cruz (THE WITCHES OF EAST END, BLUE BLOODS.)  The book, ISLE OF THE LOST, will be a prequel to the story told in the forthcoming film that will premiere on Disney Channel in 2015.

Legend has it that long ago, the most infamous villains were imprisoned on the Isle of the Lost, cut off from the rest of the world as a punishment for their misdeeds. In this dark and dreary place, the likes of Maleficent, Jafar, Cruella de Vil and the Evil Queen reside and evil reigns supreme. Mal, Evie, Jay, and Carlos are their descendants, the teenaged sons and daughters of the Isle’s most villainous characters, and they are coming of age on the Isle of the Lost.

Disney Publishing Worldwide SVP and Group Publisher Jeanne Mosure joined forces with Disney Channel to conceive a prequel novel that would act as a lead into the movie. Mosure then appointed de la Cruz and her longtime editor, Hyperion Editorial Director Emily Meehan, to the project and tasked them with fleshing out the backstory for the book in association with the film’s creative team.

Says de la Cruz, “I’m absolutely thrilled and honored to have been chosen for this fantastic project and to once again be working with Disney Publishing with whom I‘ve had a long and wonderful relationship, and to be partnering with Disney Channel is beyond amazing. The opportunity to write and expand the story with these beloved characters is a dream come true for this Disney aficionado!” Adds Mosure, “It’s a joy to be working synergistically with the brilliant team at Disney Channel, who have helmed some of the highest rated films in cable TV history, and have allowed us to bring our creative engine to the table to help enhance this delightful story featuring classic Disney heritage characters.”

ISLE OF THE LOST: A Descendants Prequel will be published as a hardcover original and goes on sale May 5, 2015.

About Melissa de la Cruz
Melissa de la Cruz is the New York Times, USA Today, Wall Street Journal, Los Angeles Times and Publishers Weekly bestselling author of many books for the middle grade, teen and adult market. “Witches of East End,” starring Julia Ormond and Jenna Dewan-Tatum, returns for it’s second season on the Lifetime Network on July 6th. Her BLUE BLOODS series has sold millions of copies and is an international bestseller and now includes the adult spinoff, VAMPIRES OF MANHATTAN. Her latest novels include HEART OF DREAD: FROZEN, THE RING AND THE CROWN, and the reissue of THE ASHLEYS.