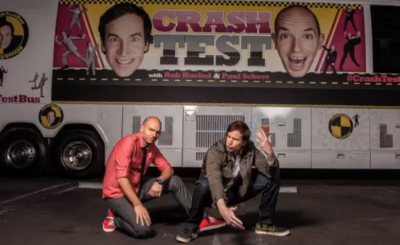 Available today for pre-order, Crash Test is a one-of-a-kind comedy special on a moving bus that turns Los Angeles into it’s stage. It’s a fast-paced improvised ride with standup on the street, an “exclusive” tour of celebrities homes, and a break-in on the Paramount Lot. This special features some of Hollywood’s biggest comedians, including Aziz Ansari (Parks and Recreation, This Is The End), Rob Corddry (Ballers, Children’s Hospital), Aubrey Plaza (Parks and Recreation, Safety Not Guaranteed), Natasha Leggero (Another Period, Neighbors), Thomas Lennon and Ben Garant (Reno 911, Night at the Museum), Jack McBrayer (30 Rock, Forgetting Sarah Marshall) and musical guest Earl Sweatshirt (Odd Future).

Huebel stated, “We were worried about lawsuits.  But that didn’t keep us from getting sued a lot” Scheer added “This is ‘The Expendables’ of comedy specials and by that I mean everyone is on steroids.”

Crash Test will retail on Vimeo On Demand for $3.99.  For further information and to pre-order the special, please go to: https://vimeo.com/ondemand/crashtest

Paramount Digital Entertainment is the studio behind recent comedy hits Resident Advisors, The Hotwives of Orlando, the Emmy© nominated Red Hour co-produced series Burning Love, and the upcoming The Hotwives of Las Vegas debuting on Hulu on August 18th.