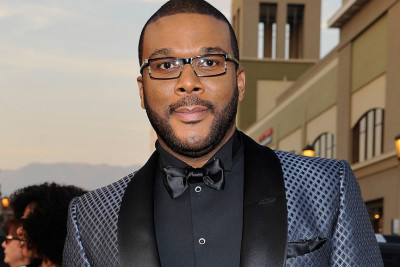 Tyler Perry will host and narrate The Passion – a modern retelling of the story of Jesus Christ’s last hours of life on Earth – live from New Orleans on Palm Sunday, March 20, 2016 (8/7C).

The two-hour event will be produced by dick clark productions and will feature ‘a cast of today’s biggest stars (to be announced) performing a variety of popular music, arranged by executive producer and hit music producer Adam Anders (“Glee,” “Rock of Ages”). For further details, follow the jump.

On Palm Sunday, March 20, 2016 (8:00-10:00 PM ET live/PT tape-delayed), FOX will present THE PASSION, a two-hour musical event, airing LIVE from New Orleans, that tells the 2000-year-old story of the last hours of Jesus Christ’s life on earth. Hosted and narrated by actor, writer, producer, director and New Orleans native Tyler Perry (“The Haves and The Have Nots,” “Gone Girl”), the special will feature a cast of today’s biggest stars (to be announced) performing a variety of popular music, arranged by executive producer and hit music producer Adam Anders (“Glee,” “Rock of Ages”).

Set in modern day, THE PASSION will follow the dramatic and inspirational story of Jesus of Nazareth, as he presides over the Last Supper, and then is betrayed by Judas, put on trial by Pontius Pilate, convicted, crucified and resurrected. The story will unfold live at some of New Orleans’ most iconic locations, while featuring a procession of hundreds of people carrying a 20-foot, illuminated cross from Champion Square outside the Superdome to the live stage at Woldenburg Park on the banks of the Mississippi River.

“THE PASSION is both wonderfully entertaining and genuinely inspirational,” said David Madden, President, Entertainment, Fox Broadcasting Company. “We are so thrilled to have the multi-talented Tyler Perry join us for this epic music production. He is the perfect host to lead the cast – and viewers – through the streets of New Orleans in this contemporary re-telling of a timeless story.”

“This Palm Sunday television event is a modern-day production of the most famous story of all time, full of universal themes, which we hope provides a unifying experience, bringing the sacred and secular together,” said Mark Bracco, EVP of Programming and Development for dick clark productions.

“THE PASSION is one of the most exciting and compelling projects that I have ever been involved with,” said Anders.  “I cannot wait to bring the greatest-story-ever-told to life through music, in a way that has never been heard before. To be able to create new arrangements of some of the biggest songs of all time to create a live ‘film score’ is a creative dream for me.”

“We are excited that New Orleans has been chosen as the location for THE PASSION,” said New Orleans Mayor Mitch Landrieu. “Year after year, our city continues to prove to be one of the best places for major motion pictures and world class productions. One of the reasons our economy continues to grow is due to our continued focus on creating opportunities for our cultural economy to thrive and this production announcement is another example of our success.”

THE PASSION is a format originally created in the Netherlands by Eye2Eye Media’s Jacco Doornbos. The Dutch version of THE PASSION has been produced annually since 2011 and has aired for the last five consecutive years, becoming a pop culture phenomenon as it built on its audience each year and commanded more than 46% market share in 2015.

Tyler Perry is an established American actor, director, screenwriter, producer, playwright, author and philanthropist. He started his career writing plays, many of which later became the inspiration for his film projects and included the introduction of the iconic character, “Madea.” Perry’s first feature film, “Diary of a Mad Black Woman,” debuted at No. 1 nationwide in 2005. In the 10 years since, the 16 films directed by Perry have all been met with massive commercial success and grossed nearly $2 billion.  He has also stepped on the other side of the camera for other directors, including David Fincher for “Gone Girl” and Rob Cohen for “Alex Cross.” He also helped release the Academy Award-nominated film “Precious,” on which he served as executive producer. He has made an indelible mark in the television space, as well.  In 2007, he debuted the series “House of Payne,” which broke cable rating records, and later launched the equally successful “Meet the Browns” on the same network. In late 2012, Perry partnered with Oprah Winfrey to bring scripted programming to her cable network, creating “For Better or Worse,” “Love Thy Neighbor,” “If Loving You is Wrong” and “The Haves and The Have Nots.” Perry will be seen next on the big screen in the sequel to “Teenage Mutant Ninja Turtles,” and in “Brain on Fire,” opposite Chloe Grace Moretz.

dick clark productions will distribute the U.S. version of THE PASSION internationally.