We all the story – Ella is born to loving parents (Ben Chaplin and Hayley Atwell – memorable in short but well written parts); her mother dies when she’s young and her father remarries after several years – before dying while away on business; her stepmother and her two lovely but incredibly vapid, stupid and cruel daughters treat Ella poorly; there’s The Prince, the Fairy Godmother, the ball and the glass slipper, and so forth.

What’s new are a few clever tweaks that change our perspective as to what’s actually happening, character-wise – and a few little additions that clarify important details.

As the grown Ella, Lily James (Downton Abbey) seems to be a clever combination of the best bits of Atwell and Kate Winslet, physically, and capable of making us belief – even when she’s most downtrodden, that she is capable of courage and kindness (her mother’s last request of her).

It’s not just that she does stand up for herself when its most important – or that she loves (and befriends) all manner of wildlife – it’s that she shows herself to be indomitable and intelligent without being (overly) weepy, and never self-pitying.

One of the movie’s best tweaks is the way in which she meets the prince – feigning loss of control of her horse after bidding a hunted stag to flee. It’s a rescue, but of the stag, not her. This tweak also allows us a chance to see that the prince – who pretends to be an apprentice named Kit (which his father calls him ‘when he’s most unpeeved at me’) – is a particularly decent fellow and, therefore, worthy of Ella. 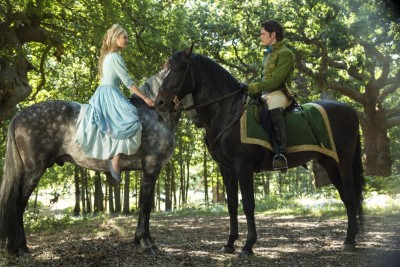 Another cool tweak is that Ella’s sisty uglers ugly sisters (sorry, stepsisters) are actually as lovely on the outside as they are unlovely on the inside – as well as being untalented, vapid and stupid (which even their mother notes on more than one occasion). Sophie McShera (Drisella) and Holliday Granger (Anastasia) are darkly, delightfully committed to presenting these sorry siblings as the 180-degree opposites of Ella.

Cate Blanchett is a marvel as Lady Tremaine, the golddigging widow who marries Ella’s father to avoid destitution and rails against everything and everyone, including Ella, when she’s left with in debt following her second husband’s death. She wears costumes that are glamourous in a forties, Veronica Lake-gone-to-extremes kind of way – and pulls off both the role and the costumes with zest.

Game of Thrones’ Richard Madden is given a chance to shine as Prince Kit and writer Chris Weitz and director Kenneth Branagh wisely let us see him at home with his father (Derek Jacobi). Their love is a direct reflection of that between Ella and her parents and gives the film more depth than we might have been expecting.

Stellan Skarsgård does a fine job, too, as the Grand Duke – a hidebound traditionalist who has already arranged for Prince Kit to marry a princess from a larger, more powerful kingdom and isn’t about to see the young whippersnapper marry for love, dagnabbit!

Nonso Anonzie (the only good thing about NBC’s failed Dracula) plays Kit’s best friend – the towering Captain of the Guard – adding to our perception of the young prince as a genuinely good person. The Captain is a cheerful bulldozer of a man who doesn’t hold back when practicing fencing with Kit and is capable of being kind and being immensely intimidating when called for.

And, of course, there’s Ella’s Fairy Godmother (Helena Bonham Carter), who is somehow both more and less dotty than her animated predecessor. Carter nails the role – especially when wielding her magic to prepare Ella for the ball. Also, it given to her to provide the explanation for why Ella’s glass slippers don’t change after the ball – not expressly, mind you, but if you watch closely, you’ll understand.

As for the effects… suffice it to say that they are as magical as the movie that contains them.