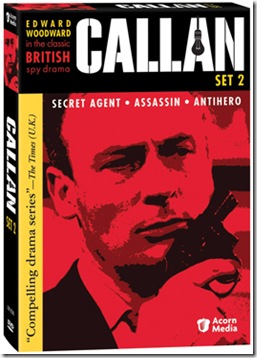 The Section had money to send its operatives anywhere in the world, and when it came to assassination, cost was no object. Unfortunately, on home ground, it was run from a hole-in-the-wall office [probably in a basement] with substandard equipment and a cavalier attitude towards its employees [most of the time…].

Callan, Set 2 opens with Callan in a Soviet prison where he has been undergoing “debriefing” – and is near his breaking point when he is taken from his cell, fed, cleaned up and taken to a neutral location for an exchange. The Section has nabbed a Russian operative named Richmond [T.P. McKenna] and arranged to swap him for Callan.

The show’s fourth and final series/season deals with how Callan, who wants out, is instead coerced into a job he doesn’t want [head of The Section, codename Hunter] where he proves not to be the right man for the job and is forced back into the field.

Although not, strictly speaking, serialized, the series does follow threads through to the series-ending trilogy, The Richmond File wherein the exchanged Russian operative returns to London and turns himself over to The Section – but for what purpose?

One of the most interesting facts concerning Callan is that much, – if not all – of its spycraft and plotting was based on the real thing. During his commentary tracks on If He Can, So Could I and The Richmond File: Call Me Enemy, Woodward relates some stories about a few of the things that the show got spot on.

The show was extremely good at setting a tone and getting the characters right. The dialogue was frequently witty [though in a more real sort of way than shows like Department S, or The Avengers] and though its pace was glacial by today’s standards, it certainly didn’t plod along.

As Callan went through the events of series/season four, his relationship with pal and sometimes accomplice, Lonely [Russell Hunter] changed – and not in a good way. The odious [infrequently bathed] Lonely did, admittedly, deserve Callan’s wrath at times [like when he nicked a bauble during an operation and got the police involved in one of Callan’s assignments].

The contrast between Callan and his immediate superior, Hunter [William Squires] was also noteworthy because under his efficient operative Callan was a man who was emotionally involved and about to crack – while Hunter was as ruthless as any Bond villain, and he was supposed to be one of the good guys. And then there was Bishop [Geoffrey Chater], Hunter’s superior – behind whose cheery outward appearance lurked a person so ruthless that he made Hunter seem benevolent. As I watched these characters, I had the uncomfortable feeling that they were more the rule than the exception in the spy biz [I fear I’ve become increasingly uncomfortable with the term “spy game” as I watched this brilliant but desperately dark show].

The series was shot both on sets and on location and, according to Woodward took considerably more than the eight-day schedules that are the norm in North American television. Stunt work was not always to the level of even the period’s best action shows, but it felt nastier and more dangerous. Woodward did most of his own stunt work, too, because he was almost always on camera.

Even at the end, Callan remained a dark piece of work. The Richmond File Trilogy found Callan in a cat-and-mouse game of death with the Russian operative – made even more tragic by the fact that each had come to like and respect each other. Even then, the show went for realism over the clichéd happy ending – and the result was a show that was far more satisfying than the usual.

Features: Audio Commentaries on If He Can, So Could I and The Richmond File: Call Me Enemy; Edward Woodward Biography.