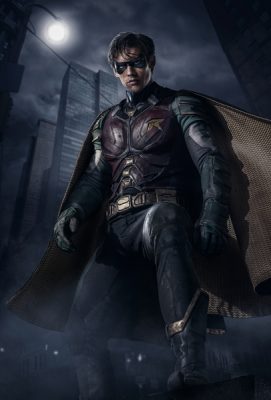 Rejoice DC Fans you finally have the Batman you’ve always wanted to see on television! Only it’s not Batman, it’s Robin and he is kicking so much ass that I was giggling like a schoolgirl. I didn’t talk about my reaction to the Comic-Con trailer in July because I was decidedly meh about it. My initial reaction was “Oh joy, a dark, grim, Robin…How original.” I brushed the show off as just going for the look at how edgy we are,“tee-hee, fuck Batman”. However, Titans is much more than that and I was blown away by how much I’m loving this show. The launch trailer did  not do the series justice.

WB made the first three episodes of the season available for review and I don’t want to delve too much into plot points because it kind of blends together to me and I don’t want to spoil eps 2 and 3. But I do like where things are headed. Ok, I have no idea where this show is headed. At the moment the loosely based plot is really character driven.

The first episode is driven mostly from Raven’s point of view. She’s a troubled girl who is plagued with weird powers a vivid nightmares. She has dreams of watching Dick Grayson’s (Brenton Thwaites) parents die. She doesn’t know who this is and has never met him, but she senses a connection with him. When her mother is brutally murdered she goes on the run and her instincts takes her directly to Dick. 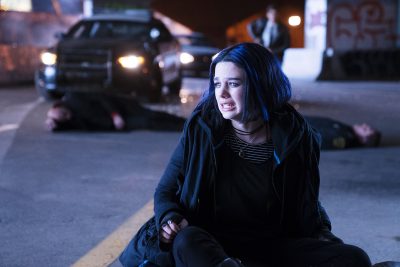 When we catch up with Dick, it’s been a year since he left Batman and a month in the Detroit police department. In his short time there he has developed a reputation as a loner who doesn’t want a partner. He is currently obsessed with tracking down a criminal who was aquitted for attacking a young girl. This is where the now “famous” fight scene from the trailers kick off. The full sequence on a big 55-inch TV is breathtakingly filmed.

When the bad guys spot Robin they immediately ignore him and look to the sky waiting for the inevitable moment when his partner drops in, when they realize it’s just Robin, they immediately relax and laugh at him. You can see Dick isn’t happy about the reaction and puts a little extra umph into his brutal takedown. I dare you disrespect me! He doesn’t say that, but it’s implied. 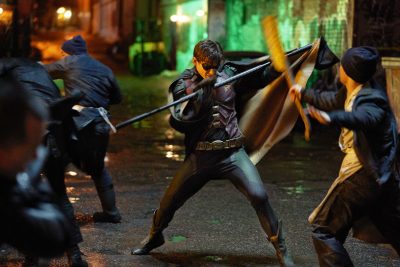 From the moment Robin lands in the middle of the pack to the ass kicking, this entire sequence flips everything we know about Robin and the idea of vigilantism on its head. It’s not sanitized and clean like we’re used to seeing in comics and past series. You see every punch, splatter of blood, feel and hear the crunch of bones as legs and arms are broken.

There’s a moment where Robin breaks a car windshield and drags a guy’s face over the broken shards, drags him out of the car and beats the living hell out of him with his staff. I winced. I actually thought he was going to kill the guy. Throughout the first three episodes he continues to say he left Batman because he was scared he’d become like him. But from this first fight sequence I couldn’t help but think – geez guy, you are already like him.

While Titans, at times, is too in love with the freedom being on a paid streaming service provides, it mostly works and isn’t as gratuitous as the trailers lead you to believe. The full fight sequence from the trailer was so bloody and violent that my mouth dropped open in sheer awe at what I was seeing.

Generally speaking I loathe this trend of making shows dark, gritty and over the top violent. Because a lot of times its done at the expense of the story and is done just as pure shock value. Its why I hated shows like Game of Thrones, American Gods and Westworld. The “story” was the violence and cheap sex scenes at the expense of telling a story. I know, it’s blasphemous to say that but the first 5 or 6 episodes of each of those shows were designed just to “shock” people.

Now maybe it’s because I know who Robin is and what the world is the violence here seemed to actually fit. I don’t think the over the top nature was necessary but it certainly didn’t detract from the story.

Once you get over the brutality of the fight sequence, which really doesn’t come until the halfway mark, the episode cuts to our introduction of the character who we Comic Book folks know as Starfire (Anna Diop). She wakes up in a car accident on an abandoned road in Vienna without knowing who she is. The next few episodes are spent with her investigating her background and apparently she’s somehow tied up with the Russian mob and other people. After burning a group of mobsters alive she discovers a picture of Raven and immediately thinks this girl has a connection to her. 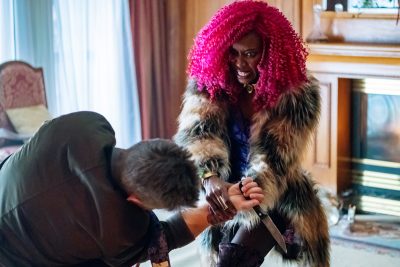 The first few episodes of Titans are pretty damn solid, if I had a complaint it’d be I really hated Starfire. The literal blankness of the character and her journey of self discovery is boring and her hooker outfit is maddening awful and sexist. I’m not ready to say Diop is a bad in this because the character itself is so shallowly written primarily because she literally doesn’t know who she is yet, it’s just boring. I will say the special effects used are solid and there’s a sequence at the end of the first episode where you can tell WBTV/DC Universe spent some money on this show.

We do get a couple of very brief glimpses of Beast Boy (Ryan Potter) in the first few episodes but his scenes are so inconsequential that it’s not worth mentioning at this point. His tiger transformation is Ok, not great so I have a feeling the show will keep his animal transformations to a minimum.

Besides Starfire, my only major complaint about this series is the scheduling is just dumb. It premieres at New York Comic Con, October 4th, and will air weekly starting October 12th. Why premiere the pilot episode so early those people who are NYCC will obviously spoil the first episode and I hate it when paid streaming services air shows weekly.

I’m paying money for your service, there’s no reason not to put the entire series out at once. Titans will be a great show to binge watch, I think airing it weekly will break the show and won’t be enough to hold people’s interest. Netflix has shown us the way and doing stuff like this is just a cheap way to try and keep people paying for the service over multiple months. I HATE this trend.

If you are a fan of Superhero shows, more important everything Batman, Titans is a must for your ongoing dive into Batman’s world. It’s the Batman TV show everyone has dreamed of. Only without Batman.