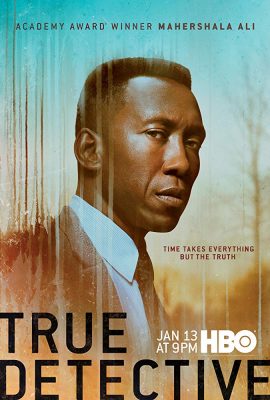 I think I’m the only person in the world who did not get the hype for HBO’s True Detective. I tried to watch the first season but it never clicked. It had amazing acting, but I found the pacing made it a slog to get through and most importantly its story telling gimmick of multiple time jumps confusing and simply broke the narrative flow. Those same issues have returned for Season 3.

I’m a simple woman, other than Quentin Tarantino movies, I like linear, straight forward, story telling. I don’t have much patience for stories that jump all over the place and through multiple timelines, especially when there’s no natural transition between scenes. It just comes across as jarring.

Season 3 opens in 2015 with Detective Wayne Hays’ (Mahershala Ali ), who is suffering from early onset Dementia, as he prepares to participate in a True Crime documentary about an old case he was involved in where two Arkansas kids went missing in 1980.  For an undisclosed reason the case is reopened in 1990 when problems with the original investigation are discovered. What issues occurred, or even if anyone was convicted aren’t made entirely clear and remain purposefully vague in the first few episodes.

This project clearly sinks or swims on the basis of Ali’s performance as he’s in nearly every scene, luckily for the show Ali is up to the task. His gravitas and quiet dignity suck you into the story. The pacing of the series feels weirdly off, like they really don’t care whether they find these kids or not and are going through the motions of an investigation because it’s their job. There’s no sense of urgency, outrage, or anything. Just a by-the-numbers, just the facts mam affair.

This is why I don’t like non-linear storytelling, just when I’m getting sucked into the characters and story progression, it jumps to another era and changes the perspective a bit on things and breaks the tension to focus on something else. This is not the type of show you can multi-task with, you really need to invest time and pay attention.

Shot on location in Arkansas, True Detective is a gorgeous show to watch. The scenery, colors, set design could be used as a master class on cinematography and direction. The light fog and fall colors really pop. The use of Slow pans as we come up on new clues, and languid cuts all adds to the overall atmosphere of the show having an oppressive feel to it.

Everyone does a nice job and there aren’t any flaws in their performances but in the first 3 episodes they aren’t given much to do, so they feel more like window dressing than people to care about. The only one who does seem to really care are the kids’ parents, Tom, ( Scoot McNairy) and their mother, Lucy, (Mamie Gummer.)

I fully accept that I may have gotten some details wrong in this review, but as much as I tried to pay attention, this we a chore to get through the first 5 episodes that HBO made available. With that said, I’m a completist and I already watched the first 5, so I’ll probably return to it once its done.