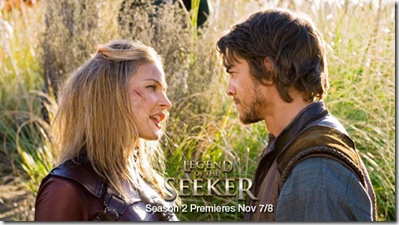 During the ensuing celebration feast, the proceedings are interrupted by the appearance of a screeling – a denizen of the Underworld. The screeling kills one of the celebrants before Richard draws it away – but when he tricks it into leaping off a cliff, it gets up and walks away unscathed. Elsewhere, Cara’s command of the Mord’Sith is challenged by Triana. She rises to the challenge, nearly killing her in the process. The moral? Never challenge a tougher opponent in the bath!

Richard, Kahlan and Zed discover a fissure from which emanates a sickly green glow. It is a tear in the veil that separates the World of the Living and the Underworld – and the source of the screeling. As long as it exists, the Keeper can send his minions to kill every living thing. The tear was caused by Richard’s use of the power of Orden. The only way to seal the rift is by using the Stone of Tears.

A troop of D’haran soldiers appears with a confounding message: Richard is Darken Rahl’s brother! Their commander, Trimack explains how Darken Rahl came to power [it’s not pretty] and how Rahl’s father disguised himself and wooed Richard’s mother. As Richard, Kahlan and Zed learn of Richard’s lineage, the shade of Darken Rahl appears to Triana and tells her that Cara helped the Seeker kill him. He then charges her with a task.

Even as Richard decides to take his newly acquired unit of soldiers to find and kill the screeling, Triana and the rest of the Mord’Sith overwhelm Cara – stripping her of her Agiel and leaving to die by the jaws of the screeling. The Mord’Sith, now led by Triana, kidnap the town’s children to force the Seeker into a trap. 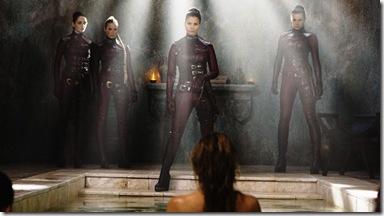 As Richard and his soldiers track the screeling, they are ambushed by Resistance fighters and a battle ensues before Richard can call a halt to the hostilities. Not much later, some of the soldiers bring Cara, now beaten and weaponless to him. When he questions her about the children, he learns what’s happened to her – but she still has an idea about where they have been taken. Even as they conger, we see the children in a dank cave, where they are threatened with an Agiel if they cannot remain silent.

Tianna informs the commander of a squadron of The Third Battalion that a renegade Dragon Corps unit plans to install Richard as the new Lord Rahl – even as Cara gives Richard the location of the children – The Drowning Cave. There is only one entrance, a narrow canyon, making it perfect for an ambush. There is also a way in through an aquifer that flows through the marsh, through which a person might slither if they’re careful. Richard tells Cara to lead Kahlan through the aquifer while he and his soldiers approach through the canyon, drawing most of the Mord’Sith from the cave.

Zed, now on his way to research the possible location of the Stone of Tears, encounters Shota, the witch who can see the future. She warns him that Richard cannot win this time. Prophecy foretells his losing – but if Zed will name a new Seeker, there might be a chance. When Zed refuses to even consider this, she gives him three signs from the prophecy: Richard will deny that which gives him power; he will embrace the one in red, and finally, he will bear the mark of the one who will destroy all life.

Richard’s Dragon Corps rides into the canyon where they are confronted by the majority of the Mord’Sith. Trianna taunts them because Richard has been too cowardly to lead them personally. As the battle begins, Cara and Kahlan enter the cave from the aquifer and defeat the two remaining Mord’Sith. As Kahlan leads the children to safety, Cara storms out to confront Triana.

The men of the Third Battalion spring the trap on the Dragon Corps but almost directly thereafter, Richard arrives on their tail to ambush them! The ensuing battle is a route – and Cara reacquires her Agiel by killing Triana. 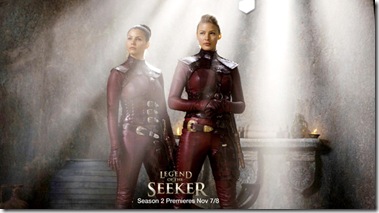 Back in town, the people cheer the return of their children – but the screeling reappears. This time, Richard tricks it into following him off a rooftop and into a fountain, where Zed freezes it in ice and Richard shatters it into a million pieces.

Zed tells Richard, “Seek out the abbot of the Cloister of Ulrich, for he keeps the secret of the stone close to his heart.” But Ulrich is in the opposite direction from the People’s Palace, so Richard decides to head to Ulrich – denying that which would give him power. Cara appears and offers her help, which Richard accepts – he has embraced the one in red. Kahlan decides to stay with him – originally, she was going to go to Idindrill, the place where the Mother Confessor is traditionally based – the Seeker will always need his Confessor by his side.

That night, Darken Rahl appears to Richard in a dream, warning him that he will not defeat the Keeper of the Underworld and placing a brand of his hand on Richard’s shoulder. Richard bolts awake, thinking it merely a bad dream. When he checks, he finds the brand on his shoulder – he has been marked by the Keeper: the one who will destroy all life.

The chemistry between the two leads – Craig Horner and Bridget Regan – remains strong and vital. Richard and Kahlan seem more at ease with each other, this season.

The revelation that Darken Rahl and Richard Cypher are brothers is a bit of a jolt. Rahl wasn’t lying last season, when he told Richard’s sister, Jensen, he was their brother. I’d hoped he was lying, but this makes sense – there three siblings who embody Light, Dark, and Twilight [or Order, Chaos and Neutrality, if you prefer].

The best of intentions can yield the worst of results, to paraphrase Zed. Sometimes, even when you do what you think is right you might not get the results you’d hoped for. It’s almost Zen. Zed may be making up his Wizards’ Rules as he goes along, but he’s definitely speaking from experience. I have to wonder how he learned that particular lesson. 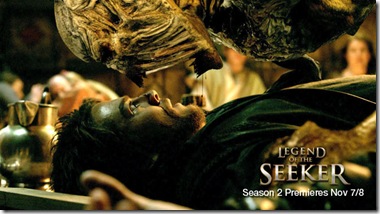 In season one we saw the Midlands’ equivalents of dragons, werewolves and the minotaur. Now we’ve seen a version of Skreeling. What other creatures will pop out of the tear in the veil?

Since Richard isn’t going to become king anytime soon, I have to wonder what will happen back at the People’s Palace – and how it won’t be good for Richard, Zed and Kahlan [or even Cara].

How much help will Cara be? And what, exactly is her agenda? Also, will Denna turn up this season? She seemed to have developed an attachment to the Seeker, so how would her return affect Cara [who seems equally fascinated by him]? And speaking of the Mord’Sith, is Triana really dead, or will one of her Sisters give her the breath of Life before it’s too late?

While LotS is a series that features a lot of action and magic, Marked had more of both than usual – yet it still told an interesting story, filled with intriguing characters.

I’m glad Kahlan didn’t “confess” anyone” – that’s a device that could get pretty tiresome.

Marked gets season two off to a fast-paced, question-filled start. I can’t wait to see what happens next!