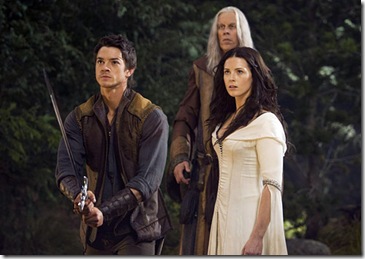 When Richard asks around about the Abbot, he is told that Abbot Henry was hanged the day before on orders from the General – whose nickname is The Butcher. Since the Abbot is dead, Cara says they should leave, but Richard tells her that those who have survived are sick and need food – and that they need to bury the bodies of the dead. The General awakens in the Underworld to be greeted by Darken Rahl, who tells him that the Keeper wishes to enlist his aid.

Kahlan informs the surviving locals that those who are strong enough, and wish to, may leave. A camp is being set up for the others just outside the prison. Unfortunately, those who would leave have few places to go – Cara informs them that their hometowns have been destroyed. Kahlan bristles at her bluntness and suggests she try to show more compassion.

A monk approaches Richard about Abbot Henry. Richard and Kahlan tell him about the rip in the veil and that they need the Stone of Tears to close it. The monk tells them that the Abbot wore a locket that had been handed down from each preceding Abbot – it must have something to do with finding the Stone. When questioned, one of the soldiers tells Richard that anything of value was placed in a trunk that The Butcher intended to take with him.

Meanwhile, a youth asks Cara if he might borrow a horse to help carry his brother away from the prison so he can be buried elsewhere. Cara allows him the horse and tells him to not take too long. When Richard, Kahlan and Zed open the box they find, it’s empty. The youth has stolen the treasure. Now a good distance from the prison/camp, the youth opens the locket and ink bleeds from it and onto his hand, forming a rune. 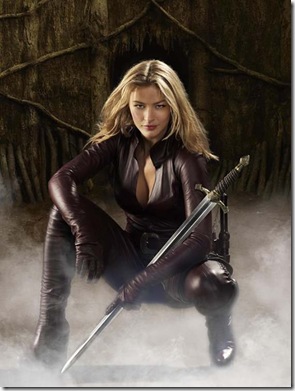 When Kahlan asks why she let the kid take the horse, Cara relies, “You told me to be more compassionate.” Just then, screams are heard from the camp’s tents. They rush out to find several dead bodies. The monk was bringing them food and that the killings were the work of The Butcher. Richard and Kahlan direct the survivors into the prison’s dungeon, where she gives one of them a key and has him lock the door behind them. Richard sends Cara after the thief, then he and Zed check The Butcher’s grave. Not only is it empty, but so are the graves of his men. They clawed their way free.

Zed tells Richard that, while the Keeper and Darken Rahl might have the ability to raise the dead, so do the Mord’Sith. Cara helped him kill Rahl, says Richard. She’s with them now and a little trust would be a good thing. A figure detaches itself from the shadows. It’s Abbot Henry!

In the makeshift camp, he tells them that when he awoke in the Underworld, Darken Rahl made him an offer: if he would kill for the Keeper, then he could return to the World of the Living. He took the offer only so he could retrieve the locket. Zed realizes that the Keeper is changing the dead into banelings. Before he can answer Richard’s questions about the locket, Abbot Henry begins to decay – since he hasn’t killed anyone, he’s been called back to the Underworld!

Richard decides that Henry needs to kill someone – someone guilty of great crimes: one of the imprisoned D’Haran soldiers. But they find the soldiers slain in their chains. Suspicion immediately falls on the man to whom Kahlan gave the keys to the dungeon. Before his body turns to dust, Henry explains that they need to take the rune to the Province of Pomona. The rune, he says, is a key, but before he can say to what, he disintegrates. 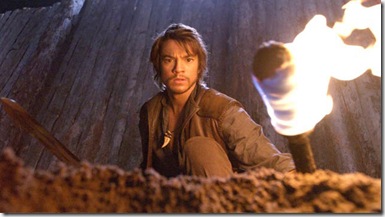 Elsewhere, our young thief is about to get busy with a couple of “professional” girls when Cara arrives. When he brags about the D’Haran soldiers couldn’t break him with their tortures, Cara adopts a different tactic. Whispering intimate pleasures into his ear, she gets him so revved up that he quickly tells her where to find the treasure. She and the boy return to camp just after Kahlan learns that their suspect in the soldiers’ deaths didn’t do it. When they see the rune on the boy’s hand, they realise that they have to take him to Pomona.

Noises in the night awaken Rune Boy. When he opens the door, a crazed woman stabs him over and over and over [we saw her earlier, worried about her son who had been kept locked up away from the adults]. At about the time Richard and Kahlan find the body, Rune Boy awakens in the Underworld and is approached by Darken Rahl. Before Rahl can finish his pitch, the boy started choking and wakes up in the World of the Living. Cara has given him the Breath of Life. He identifies his killer and we see Kahlan in a cell, with the woman chained to the wall. She made her deal so she could come back to look after her son.

Elsewhere, The Butcher and his men are in the midst of a killing spree when Rahl appears to them in a fire and tasks them with finding the person who bears the rune. The banelings return to the prison, but Richard has had Zed take everyone away through a hastily improvised rear exit. As the banelings mill around, Richard fires a flaming arrow into a pool of pitch and sets of the prison’s fuel supply – burning the banelings out of this world – and without bodies to return to, they can never return. Richard has figured out what his mark means – every enemy dies because of him will be returned to life as a baneling. With each death, he is strengthening the Keeper’s army.

While Zed distributes the treasure to the remaining locals so that they can make a new start, Kahlan takes the baneling woman’s son, William, to join the surviving monk who will take him to a new home. Rune Boy tries, again, to get Cara to finish what she started but is greeted with a thrust of her agiel – in what looks to be a particularly sensitive place. The episode closes on the monk – seeing that the boy’s hands are decaying. William slits his throat and starts towards his new home.

Seeker hasn’t exactly shied away from blood, but Baneling features gouts of the stuff. As the series progresses – and gets darker – the amount of onscreen blood becomes greater. Oddly enough, though, we seldom see the blood spurt when Kahlan or Cara slice an enemy’s throat open. I wonder if that means something… 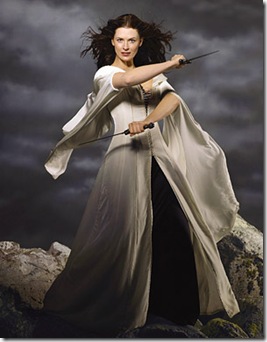 Mord’Sith are extremely good at handing out pain and now, it seems that they are also masters of pleasure and, as this ep shows, not unwilling to use the promise of pleasure to get what they need – before slamming that door shut. Mord’Sith are sadists – they enjoy their work.

Cara seems to be trying to be nice. It’s interesting to see her play with the new [to her – at least insofar as it’s relevant to her] concepts of compassion and trust. I have no doubt that she has her own agenda, but like Denna before her, I wonder if she’s being genuinely affected, emotionally, by Richard.

Despite Shota’s prophecy last week, Zed still has faith in Richard – even after the signs she predicted all came to pass.

The Keeper understands people very well – every baneling he creates has a reason for accepting his deal, even though they can’t possibly benefit from it.

We have a temporary new member of the Seeker’s party now. The question is, how much trouble will Rune Boy be for them?

Baneling was comparably humourless. Outside of Cara’s treatment of Rune Boy, there weren’t many laughs. Given the darkness of the ep, that was probably the right call.

I’m getting a little tired of big, dramatic slo-mo moments, though. They should probably be parcelled out a little more carefully or they’ll lose their impact completely.

Is it just me, or was Cara really the only character that seemed to have any depth to her, this week?

Also missing in action: the big romance. Would that have been out of place here? Maybe…

Next: Broken – Cara’s past catches up with her.

3 thoughts on “TV RECAP: Legend of the Seeker: Baneling – What the Mark Means!”