Entertainment News for The Rest of Us
Michelle Alexandria
Blu-Ray, DVD Reviews 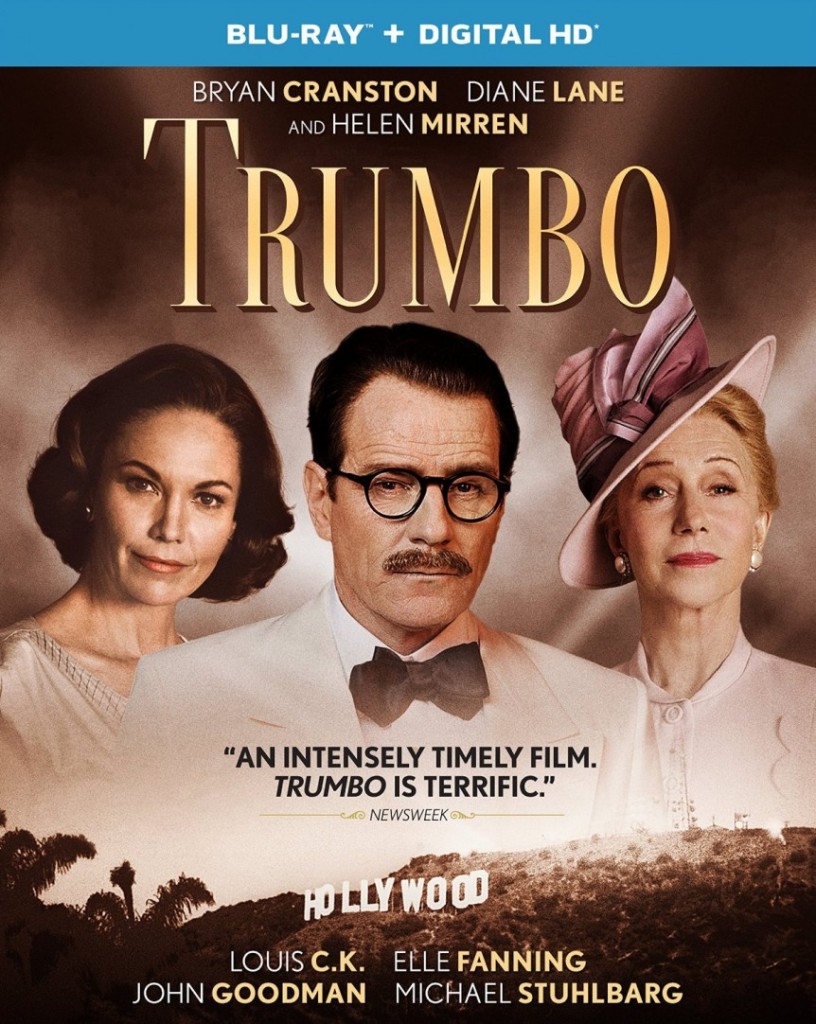 Based on a true story, Cranston plays Dalton Trumbo one of the famous Hollywood Ten, members of the Hollywood establishment who refused to testify before the House Un-American Activities Committee (HUAC) in 1947. I knew about the HUAC, but I never heard the name Dalton Trumbo before and that’s kind of criminal. This man is responsible for writing the screenplays for some of the biggest Hollywood Films of his time including: Roman Holiday, The Way We Were and Spartacus.

After seeing this movie, it is hard not to come away with a newfound respect for people like Trumbo. The fact that the Government could willfully ruined people’s lives and blacklist people because of their political beliefs is scary and goes against everything this county supposedly stands for and all it took was a couple of skillful fear mongers to whip this country up into such a state of hysteria that for over 10 years it twisted this country and turned friend against friend. Those who think this can’t happen today, need look no further to our current Presidential campaign with sleazy demagogue like Trump, Cruz and the other clowns in the Republican clown car.

Director Jay Roach does a great job of bringing the time period to life, however you can tell his scope and perhaps budget was limited because there weren’t any sweeping moments or large scale sets he had to deal with. From a story standpoint everything took place in intimate settings in people’s houses or in front congressional committees. It’s quiet film that rarely devolves into hyperbole. Although Trumbo is known for making public speeches about the injustice he and his friends are facing.

Appearing thin, with a gaunt face Cranston brings Trumbo to life and is always fascinating to watch. Trumbo wasn’t a man who stoically suffered in quiet. He tried to fight the system with everything he has, but every loss is felt by the audience. When all of his Hollywood friends and staunches supporters turn on him, you feel it.

The Hollywood establishment at the time should be ashamed of themselves, but they never were, no they were all rewarded, REWARDED for their actions and never suffered public condemnation. John Wayne (David James Elliott) and Heda Harper (Helen Mirren) were two of the worst offenders and gleefully went about abusing their authority to destroy people’s lives and never apologized for it.

But there were also unsung heroes during this era, people like Frank King (John Goodman) a small time producer who gave Trumbo and his friends jobs when no one else would. Granted they weren’t able to write under their own names, but they had work and to my surprise Kirk Douglass (Dean O’Gorman) who was one of the first big name Hollywood players to tell the Committee to go to hell and that he’ll hire whoever he’d like to be part of his movie.

Trumbo isn’t quite a triumph, it tries a bit too hard to be Oscar baity, but the movie tells an important story that needed to be told and rarely falters in doing so. It’s one of my favorite films of 2015. A movie that people who love films should watch at least once.

This is a disappointing featureless release. Lazy doesn’t even describe it. It only includes two featurettes that barely total 6 minutes and a digital copy version that works with both UltraViolet and iTunes (I always love it when it works on both services.).

What is there to say? A solid film gets a pretty shoddy Blu-ray release. Of course the picture and audio quality is fantastic, but where are the features? We couldn’t at least get a 10 or 15 minute substantive documentary about the real Trumbo and the Hollywood Blacklist? Skip the Blu-ray unless you can find a good sale, unless you are someone who only cares about having the film.