Danny Boyle’s unsuccessful films are more interesting than most directors’ good ones. Trance – a genre-bending heist/psychological thriller hybrid – is not one of his unsuccessful movies.

Trance is an engaging film from the get-go because the opening act is told from the point of view of Simon (James McAvoy), a charming auctioneer of fine art. We see him going through procedure drills for what to do in case of a robbery as he runs down the checklist of what to do and not to do in such an instance and we are completely won over.

A heist follows in which he does most of the required actions except for the most important one – which results in his being clocked by the heist’s mastermind (Vincent Cassell). The actual heist is as well thought out and well executed as planned, but when the item stolen – a valuable painting – goes missing, we learn that Simon was the inside man on the job and that, following Franck’s blow, he can’t remember where he put it. 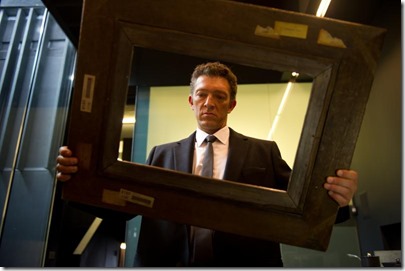 When physical persuasion fails to get results, Frank, the mastermind, decides they should try hypnotherapy. Despite his incredulity, Simon goes along and picks a hypnotherapist at random – one Elizabeth Lamb (Rosario Dawson). What follows is as twisted a trail of repressed memories, sex and violence (even beyond the torture that failed to make Simon remember the painting’s location).

Before long, we don’t know, for certain, what’s happening to whom or even why/why not. I’m not certain that the various twists and detours Boyle and scriptwriters Joe Ahearne and John Hodge put us through stand up to close scrutiny after we leave the theater, but I was caught in the web of their storytelling right up to the end.

One of the things that make Trance so spellbinding is that it builds character and events very carefully – and then subverts what we think we know in ways both subtle and not. None of the three main characters is exactly what we see – but even by Trance’s end, they might not be what we see then.

Though there are three other men involved in the initial heist, the film is essentially a three-hander. The relationships between Simon, Frank and Elizabeth are the centerpiece of the film and it’s not often we get to see three such strong characters in such a struggle – emotionally and physically.

This the rare film where every single action – every line of dialogue – means something and is integral to the whole. Even a spectacular moment of full frontal nudity from Dawson turns out to be completely essential to the story. Not a single moment of the film is gratuitous.

Boyle takes the story places we don’t expect and plays with pacing in usual ways – ‘real’ events play out as surreal, while surreal events feel completely real. That’s when ‘real’ events are played as real and surreal events are played as surreal. It would be very easy to get lost in the film’s twists and turns – unless you pay close attention. Even then, there are moments…

McAvoy, Cassell and Dawson give amazing performances and play off each other extremely well. Alone they are riveting; together they’re positively explosive. Between the stunning script, Boyle’s muscular direction and the top flight performances, Trance is a real killer.