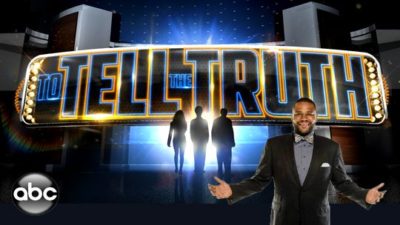 Even better, they get to seek out some amazing people from five trios of claimants, including the inventor of the hashtag and the national champion Sumo wrestler!

The season premiere of “To Tell the Truth,” Episode 206, SUNDAY, JANUARY 1 (9:00–10:00 p.m. EST), features Ashley Graham, Jalen Rose, Angela Kinsey and Donald Faison on the celebrity panel.  In this episode the panel is faced with finding the national champion Sumo wrestler, the inventor of the hashtag, the creator of the language Dothraki used on “Game of Thrones,” an original dancer from “Soul Train” and someone who has survived a bear attack.

Hosted by Anthony Anderson, “To Tell the Truth” is a funny re-imagination of the beloved game show by the same name. The all-new version takes the excitement to another level, featuring fun characters from pop culture. Anderson’s mother, Doris, is also part of the fun as commentator.

In each round the panel is presented with three people who all claim to be the same person with the same incredible talent, job or achievement.  One is sworn to tell the truth while the others are not. The panel of celebrities has a chance to grill each participant before taking turns deciding who they think is telling the truth.