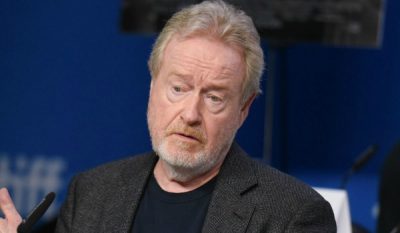 Raised by Wolves centers on two androids tasked with raising human children on a mysterious virgin planet. As the burgeoning colony of humans threatens to be torn apart by religious differences the androids learn that controlling the beliefs of humans is a treacherous and difficult task.

The talented roster of actors includes:
Amanda Collin (A Conspiracy of Faith, A Horrible Woman) will play Mother, an android with a secret past who has been programmed to raise a brood of human children on a faraway planet. In addition to teaching her children to survive, Mother must also keep them from believing in the unreal; to ensure this virgin planet isn’t torn apart by the same religious differences that lead the Earth to its ultimate destruction. Mother hopes her family will serve as the nucleus for a peaceful, technocratic colony — a new beginning for humanity. But as she struggles to mold these growing humans, she also begins uncovering secrets hidden within her own programming, secrets that could help her protect her family, but could just as easily destroy them.

Abubakar Salim (Fortitude, Jamestown) will play Father, an android whose devotion to his human children is matched only by his devotion to Mother. Father is a considerably less complex model than Mother, but thanks to his wisdom and patience, he is no less important to the family’s survival. Like many human fathers, Father wants to be funny — especially in the eyes of Mother — but it’s a skill he often struggles with. What he is good at is always being there when you need him.

Winta McGrath (Aloft, Red Dog: True Blue) will play Campion, a scrappy and soulful 12-year-old boy who was raised by Mother and Father since birth. When a ship of humans arrives from Earth, Campion is exposed to followers of religion for the first time in his life, and starts to question whether his android parents really know what’s best for him.

Travis Fimmel (Vikings) will play Marcus, a roguish, charismatic soldier, who was the ultimate survivor back on Earth. To escape the doomed planet, Marcus and his wife Sue made a dangerous decision that they must keep secret at all costs. But now that they’ve arrived in the new world, Marcus is struggling to reconcile the sins of his past, even as he continues to embrace the killer instincts that always kept him alive in the first place.

Niamh Algar (The Virtues, Calm With Horses) will play Sue, a strong, resourceful combat medic who put aside her reservations about coming to this new planet at the urging of her husband Marcus. But as the planet’s mysteries and dangers threaten to upend the promise of a new life, Sue questions whether they have compromised too much in the name of survival.

Felix Jamieson (Game of Thrones, The Ghost) will play Paul, Sue and Marcus’ 12-year old son, a boy of unshakable faith in both his religion and his father. Having always felt like an outsider back on Earth, Paul strikes up a complicated friendship — and rivalry — with Campion. Though the two young men begin to learn from one another, they also begin to challenge one another.

Ethan Hazzard (The Long Song, Damned) will play the highly intelligent Hunter, age 17. His father was a high-ranking member of a powerful religious order back on Earth. But now that the hierarchy he once sat atop no longer exists, Hunter must learn what it’s like to be just like everybody else.

Jordan Loughran (The Infiltrator, Emerald City) will play Tempest, 17. Raised with a religion she never really believed in, she sees Mother and Father as superior to the human guardians who so often let her down. Soon after arriving in the new world, Tempest discovers she is pregnant; the result of a rape she suffered at the hands of a high-ranking member of her church.

Aasiya Shah (Call the Midwife, Unforgotten) will play Holly, 15, a burgeoning warrior who is trying to find her place in this strange new world.

Ivy Wong (Star Wars: Rogue One, Maleficent 2) will play Vita, 9, the youngest member of the family, but also the most fearless.

Raised by Wolves is produced by Scott’s Scott Free Productions in association with Turner’s Studio T, with Scott, Guzikowski, David W. Zucker (The Man in the High Castle) and Jordan Sheehan (The Terror) serving as executive producers, alongside Adam Kolbrenner (Prisoners) and Robyn Meisinger (Prisoners). The international rights to the series will be distributed through Turner International.