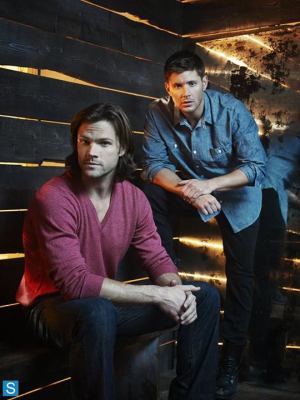 As Supernatural fans await the season premiere of their wickedly favorite show, TNT is giving viewers the chance to binge watch the entire ninth season. TNT will kick off its season 9 marathon Monday, Oct. 6, at 10 p.m. (ET/PT), airing all 23 episodes of the season up until the launch of season 10 the following night.

Supernatural will kick off its 10th season on The CW Tuesday, Oct. 7, at 9/8c. The series is produced by Warner Bros. Television in association with Wonderland Sound and Vision, with McG (Charlie’s Angels, The O.C.), Robert Singer (Midnight Caller), Jeremy Carver (Being Human), Phil Sgriccia (Revolution) and Adam Glass (Cold Case) serving as executive producers.

10 p.m. – “I Think I’m Gonna Like It Here” – Sam collapses as Season 9 begins and Dean sends out an emergency plea via prayer to every angel in the area to help Sam. In exchange, Dean agrees to owe that angel a favor. But his request is answered by numerous angry angels who want to kill him.

11 p.m. – “Devil May Care” – Dean kidnaps Crowley in order to find the demons on earth. Meanwhile, Abaddon reappears and plans to take over hell.

Midnight – “I’m No Angel” – A group of angels hunts Castiel. Dean & Sam race to find their friend before the angels do. Homeless, Castiel tries to make his way through the city and comes across some unexpected surprises.

1 a.m. – “Slumber Party” – Sam & Dean meet Dorothy from Oz and the wicked witch when they locate an ancient computer in the Men of Letters house that dislodges a hidden hex bag that in turn unleashes a magical green-webbed wall. Dorothy became trapped in the web years ago.

2 a.m. – “Dog Dean Afternoon” – Sam & Dean investigate two gruesome murders and realize that a German shepherd witnessed both deaths, so they use a spell that allows Dean to communicate with the dog. Unfortunately, the spell comes with unexpected side effects.

3 a.m. – “Heaven Can Wait” – Castiel gets a job and starts enjoying life as a human, but when he learns about some local disappearances he asks Dean to help him investigate. Meanwhile, Crowley agrees to help decipher the tablet in return for one phone call to hell.

4 a.m. – “Bad Boys” – Dean helps an old friend with a ghost problem at a home for delinquent boys. Dean was sent there years before for stealing food. When Sam learns about Dean’s past he is stunned and asks for more information, which Dean is reluctant to give.

5 a.m. – “Rock and a Hard Place” – Sheriff Mills asks Sam and Dean to help her investigate the murders of four members of a church chastity group. Dean disappears shortly after the brothers join the group; and Sam and the sheriff team up to rescue him.

6 a.m. – “Holy Terror” – An angel war begins and a massive amount of angels are slaughtered. Sam and Dean investigate and run into Castiel who is soon captured and tortured. Meanwhile, Dean questions Ezekiel’s demands and wonders if it is time to tell Sam the truth.

7 a.m. – “Road Trip” – Dean hunts the angel who killed Kevin and tries to separate Sam’s brain from an angels mind in order to expel Gadreel. However, the only person who knows how to do that is Crowley.

8 a.m. – “First Born” – Crowley, who wants to reclaim his place as king of hell, seeks Dean’s help to find the “First Blade,” the only blade that can kill Abbadon. Unfortunately, Cain, the first-born son, controls it.

9 a.m. – “Sharp Teeth” – Sam and Dean visit Garth in the hospital and demand to know where he has been. Garth runs away and the guys investigate why he fled and are stunned by what they uncover.

10 a.m. – “The Purge” – Sam and Dean work undercover at a spa to investigate murders in which the victims were hundreds of pounds lighter after their deaths. All of the victims attended the spa for weight loss; and the brothers suspect that witches are to blame.

11 a.m. – “Captives” – Sam and Dean are shocked to discover that the Men of Letters’ bunker is haunted. Their investigation leads them to a storage facility where the demons are keeping a prize possession. Meanwhile, Castiel is captured by Barholomew.

Noon – “#THINMAN” – Sam and Dean investigate a girl’s death that may be linked to a ghost. Their probe leads them to encounter Harry and Ed, two famous supernaturalists, who are also on the case.

1 p.m. – “Blade Runners” – Sam and Dean get help from a former member of the Men of Letters to locate the First Blade, after Crowley falls off the wagon and starts injecting himself with human blood.

2 p.m. – “Mother’s Little Helper” – Sam visits a town where ordinary people are turning into violent murderers. His investigation reveals that the Men of Letters came to the town in 1958. Meanwhile, Dean struggles with effects from the Mark of Cain and is tested by Crowley.

3 p.m. – “Meta Fiction” – Metatron tries to get Castiel to join forces with him. Meanwhile Sam and Dean capture Gadreel.

4 p.m. – “Alex Annie Alexis Ann” – Sheriff Mills tries to save a girl from a family of vampires who are using her as bait to lure in humans they can feed on.

5 p.m. – “Bloodlines” – Sam and Dean look into monster families that are running Chicago’s underbelly, including a clan of shape-shifters and a group of werewolves. Meanwhile, they meet someone who has a personal grudge against the creatures.

6 p.m. – “King of the Damned” – Abaddon demands that Crowley help her kill Sam and Dean. When he refuses, she reveals a shocking bargaining chip to change his mind. Meanwhile, Castiel captures one of Metatron’s angels, and gets Sam and Dean to help him with the interrogation.

7 p.m. – “Stairway to Heaven” – Tessa the reaper returns and leads a conspiracy against Castiel’s angel followers. Meanwhile, Dean is eager to use the First Blade when the angels are attacked, but Sam worries about the cost to his brother whenever he uses it.

8 p.m. – “Do You Believe in Miracles” – Season 9 ends with Dean feeling the effects of the First Blade. Meanwhile, Metatron makes his move against humanity, as Sam, Dean, and Castiel try to stop him.

TNT is television’s destination for drama. Seen in 101 million households and ranking among cable’s top networks, TNT is home to such original drama series as Rizzoli & Isles, Major Crimes, Falling Skies, The Last Ship, Murder in the First, Legends, Perception, Dallas and Franklin & Bash. TNT’s upcoming slate of original scripted dramas includes The Librarians, Public Morals, Proof and Transporter The Series, which will make its U.S. television debut on the network this fall. TNT also features such dramatic unscripted series as Cold Justice and the upcoming On the Menu and Wake Up Call. In addition, TNT is the cable home to popular dramas like Castle, Bones and Supernatural; primetime specials, such as the Screen Actors Guild Awards®; blockbuster movies; and championship sports coverage, including the NBA and the NCAA Division I Men’s Basketball Championship.