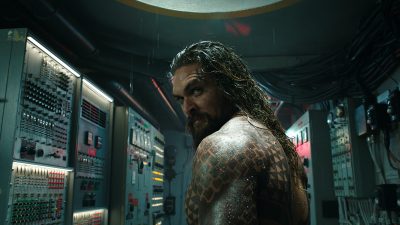 plagued the character since the Super Friends cartoons – making ‘Arthur talks to fish’ something strange and powerful and depicting the character’s communications with aquatic life visually the same as the cartoon but doing so in sequences that have heft and importance to the story.

Plot-wise, Aquaman has a lot of territory to cover and does so with both efficiency and panache.

In quick order we see how Atlantean queen Atlanna (Nicole Kidman, Destroyer) washed ashore near Tom Curry’s (Temuera Morrison, Tatau, Moana) lighthouse during a storm – and how they fell in love as he nursed her back to health; leading to the birth of Arthur (played as a child by Tamur and Tainui Kirkwood and Kaan Gulder).

In what feels like no time at all, we get the sequence that puts an end to ‘Aquaman talks to fish’ jokes forever and we’re moving into the life of the adult Arthur (Jason Momoa, The Red Road, Frontier). 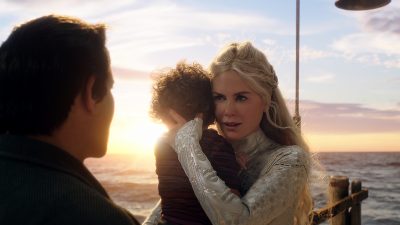 His encounter with some pirates on a Russian submarine goes bad for the pirates – causing the death of the father of the man who will become Black Manta (Yahya Abdul-Mateen II, The Getdown, Baywatch).

Shortly thereafter, he is approached by Mera (Amber Heard, 3 Days to Kill, The Danish Girl) who implores him to come to Atlantis to claim his rightful place on the throne. 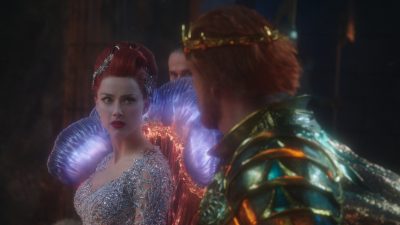 Besides telling us Aquaman’s origin, the film – written by David Leslie Johnson-McGoldrick (The conjuring 2, The Walking Dead) and Will Beall (Castle, Gangster Squad) and directed by James Wan (The Conjuring 1 & 2, Furious 7) – the film also has to establish several undersea realms and give us the origins of Black Manta and Ocean Master (Aquaman’s two deadliest arch-enemies).

Arthur’s journey to superherodom begins with a mistake – challenging Atlantis’ King Orm (Patrick Wilson) before learning what the challenge means or how to fight properly undersea.

Saved by Mera’s intervention (she can manipulate water in unique and fun ways), he goes on a quest to find the trident of Atlantis’ first king – a quest that takes him and Mera to the Sahara Desert and, eventually, Italy. 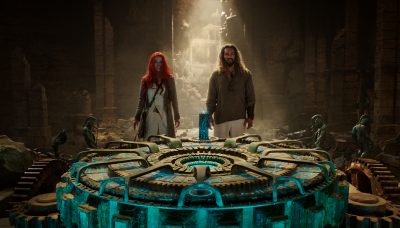 Even should he acquire the trident, it has a guardian that no one has ever survived. So there’s that – plus the hordes of Atlantean warriors that Orm sends after the pair.

For Aquaman, Wan has created a unique and beautiful world in Atlantis – a mix of ancient ruins from the days when the city sank into the sea and the sophisticated and advanced city that it has become.

The seascapes of the film are CGI and more advanced than anything we’ve seen so far. They are utterly convincing (aided by the manner in which Arthur, Orm and others move through them). 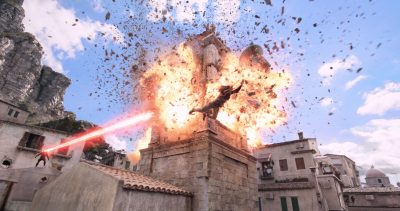 There’s plenty of action – Arthur’s encounters with Black Manta and King Orm are both beautiful and devastating – and each action sequence helps define the characters within it.

Momoa’s Arthur Curry/Aquaman is a remarkably humble guy despite his strength and powers – a key to succeeding in his quest where others failed.

He’s also charming and fun – when not being shot at – and it’s easy to see why Mera, who is initially appalled by him, would grow to be his willing ally.

Wilson is a slick operator as King Orm – he, too, can be charming, but only if it serves him. He pretends to be bound by honor and tradition but is always aware of (or creates) loopholes.

Abdul-Mateen’s Black Manta is, at first, a bit sympathetic. We can understand his rage and desire for revenge, but, unfortunately, we don’t get to see enough of him to get a good sense of what he was like before his father’s death so his singular commitment to killing Arthur soon becomes less interesting.

Wilson’s Orm is a far more intriguing character because, although he has a singular combination of goals (to combine undersea kingdoms under his rule and destroy the surface dwellers), he shows more facets of his character.

And, just in case we don’t catch it early on, we get some pretty obvious clues that the film is analogous to the story of King Arthur (which adds a little depth to the comics’ mythology).

All in all, Aquaman is easily the second-best DC Cinematic Universe film behind only Wonder Woman.