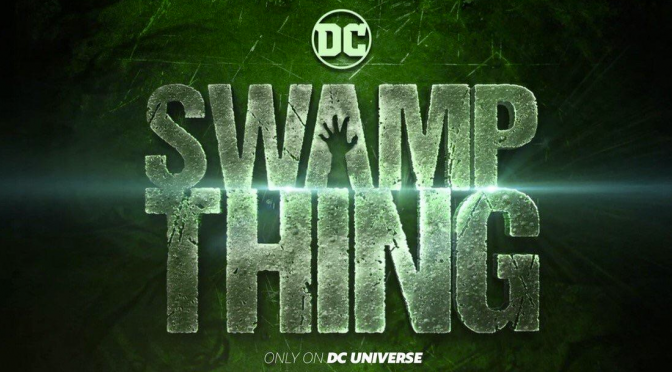 DC Universe is not playing around, if you haven’t checked out the service, run, don’t walk. After the critical success of their wonderfully weird Doom Patrol, they are going obscure again with the classic DC series Swamp Thing.  From the opening sequence to the end of the 2nd episode I was hooked.  There’s just something wonderfully creepy and cinematic about the unique viewing experience. Swamp Thing launches on the DC Universe App, May 31st.

First thing you need to know about this show is WBTV spent some money on it, for the most part, as far as I can tell all the affects are practical. Now I’m not one of these knee jerk “CGI sucks” people but the make up work here really adds to the creeping horror that the first two episodes invoke.

The 2nd thing you need to know is that there’s a real old school X-Files vibe to the look, feel and vibe of the show. 3rd thing you need to know is the first two episodes are directed by Len Wiseman of Underworld and Sleepy Hallow fame. It’s dark, gloomy, and swampy a show like this should be. Honestly if you’ve seen Underworld, you almost know what to expect here. I know a lot of people didn’t like the Underworld series, but there were 5 movies so despite the loud haters, someone must have liked them besides me.

4th thing and most important thing is, the show is executive produced by James Wan. You know the guy behind the Saw films, The Conjuring Franchise, Aquaman, etc. There’s a lot of good pedigree behind this show. It’s hard to believe that I did one of James Wan’s earliest interviews, 4 months before Saw was released. Now look at him. Yes, I’m taking credit for his career. 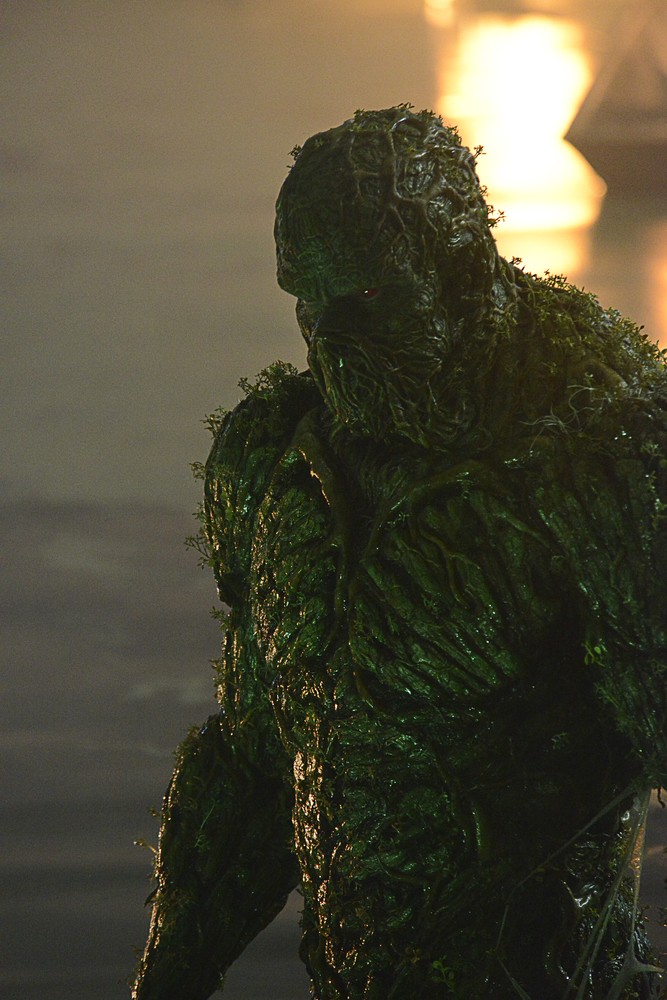 DC Universe has not let us down yet, Titans had a terrible ending, but up until the final ep, I loved most of Titans, and while I was confused and conflicted by Doom Patrol for the first few episodes, it was undeniably well produced so I want to go back and binge the entire thing at some point.

The one thing I didn’t like about the first two episodes is that it’s letterboxed. I have an expensive OLED TV, I want my screen filled up, I don’t want it cut in half with annoying black bars, especially not when it’s something made for TV! 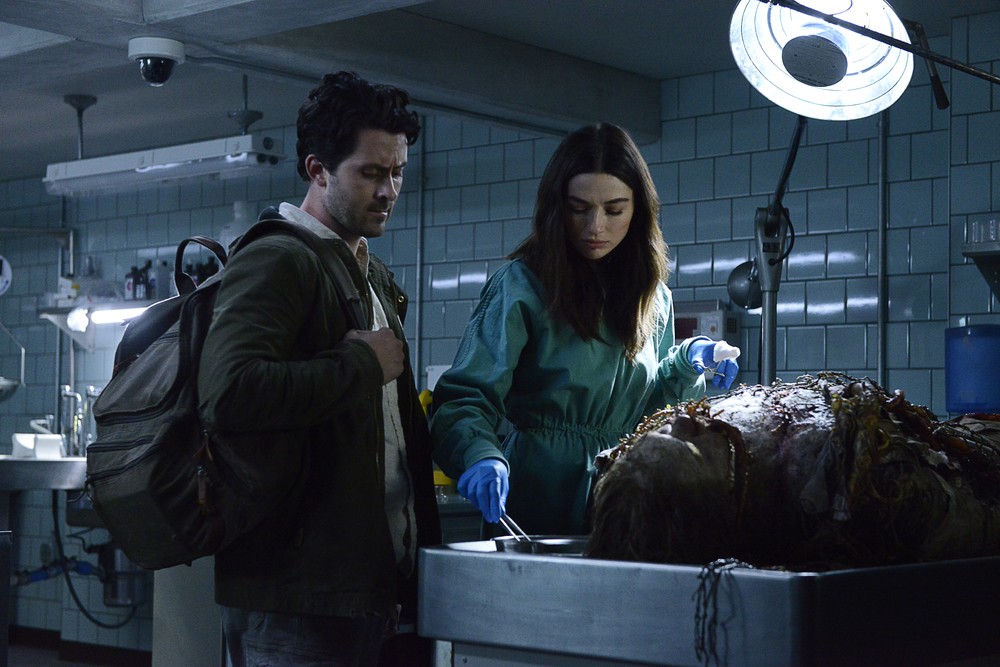 Keep in mind, I do not have a handle on all the character names and no character bio to work with, so don’t yell at me if I get some of these wrong.

Crystal Reed, who many may remember as Alison Argent from one of my old obsessions MTV’s Teen Wolf is Abby Arcane a doctor with the CDC who is called in from the Congo to figure out a mysterious outbreak back in the hometown she left behind years ago. There she meets another out of town scientist named Alec Holland (Andy Bean). In addition to people being infected by some weird virus, people are getting killed by plants.

Abby also has a tragic history that involves the death of her childhood friend Shawna Southerland (Gwen Sharp) where some folks in town, including Shawna’s mother Maria, played by Virginia Madsen, still blame her for whatever tragedy happened to her daughter and is kind of an unrelenting you know what. 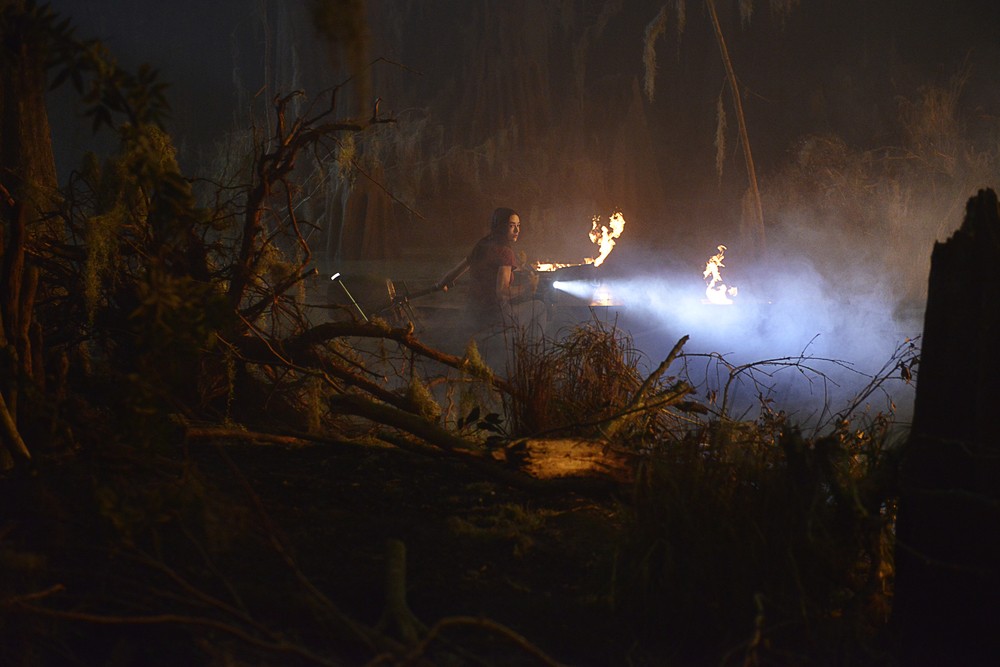 Will Patton is Avery Southerland, Shawna’s father and one of the town’s big wigs who Alec is secretly working for. Avery in the first two episodes is just shy of being the standard mustache, twirling villain. You just know he’s up to no good. Especially when he tells Abby that he’s never held what happened to Shawn against her and that he still considers Abby to be his daughter.

Matt Cable (Henderson Wade last seen in Riverdale and A Million Little Things) is one of Abby’s old friends who is now a Debuty. Lunden De’Leon is the town Sheriff who doesn’t like or trust Abby. I can already see she’s being set up to be the typical useless, do nothing Sheriff. Turns out she’s also Matt’s mother and doesn’t like the obvious crush that he’s always had on Abby.

There’s also the typical small-town reporter, Liz Treymane played by Maria Sten who some may recognize from SyFy Channel’s Channel Z and the movie Straight Out of Compton. In addition to Matt, Liz is one of the few people in town that still likes and trusts Abby.

It’s always hard to tell where characters are going to go and their histories from such a limited sample size, but so far, all the actors are solid and I want to see how the story unfolds and how these folks really relate and interact with each other.

It  still ticks me off that streaming services air shows weekly, but I can’t do anything about that.  Swamp Thing is the perfect follow up to Doom Patrol, it’s just as weird and off kilter just without the dry comedy and satire and fills that classic X-Files vibe that I’ve been missing. As someone who has never read a Swamp Thing Comic, I’m very intrigued by this show and looking forward to seeing how it all unfolds.