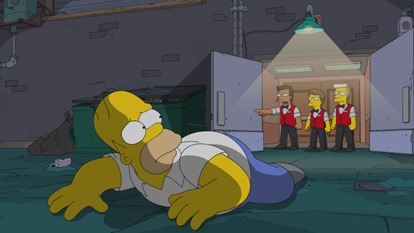 Check out the press release, after the jump, for more details

“Judd Apatow, Leslie Mann, Paul Rudd and Seth Rogen have been looking for a project to do together for a long time. So we were happy to finally give them this opportunity,” said THE SIMPSONS executive producer Matt Selman. “Will Arnett, Channing Tatum and Rob Halford never wanted to work together, so please don’t tell them they’re in the same episode.”

In “Steal this Episode,” Homer (Dan Castellaneta) is banned from the Springfield movie theaters, so Bart (Nancy Cartwright) teaches him how to download movies illegally. Homer creates a backyard movie theater where he shows his friends pirated movies for free. But Marge (Julie Kavner) feels guilty for watching illegally downloaded movies, and in trying to pay the film studios back for “stealing with her eyes,” she accidentally tips off the FBI to Homer’s “Cinema Pirate-diso.” The Simpsons must go on the run to escape the relentless justice of head FBI anti-piracy agent (Arnett), who is determined to bring Homer to justice at any cost.

Judd Apatow has been closely associated with many of the biggest comedy films and hit TV shows worldwide. He is the executive producer of the Emmy Award- and Golden Globe Award-winning comedy “Girls.” He also produced “Anchorman 2: The Legend Continues.” Other feature credits include “This Is 40,” “Knocked Up,” “Funny People” and “The 40-Year-Old Virgin” (co-written with Steve Carell). His producing credits include “Superbad,” “Bridesmaids,” “Pineapple Express,” “Talladega Nights,” “Forgetting Sarah Marshall,” “Get Him To The Greek,” “Walk Hard,” “Stepbrothers” and “Anchorman.” Apatow will next direct and produce the feature comedy “Train Wreck,” starring Amy Schumer.

Will Arnett can currently be seen on the hit comedy “The Millers” and on the Emmy Award-winning “Arrested Development.” He will next be heard as “Batman” in “Lego: The Piece of Resistance” and will voice the lead in the animated film “The Nut Job.” Arnett will also star opposite Megan Fox in the upcoming Michael Bay-produced “Teenage Mutant Ninja Turtles.” 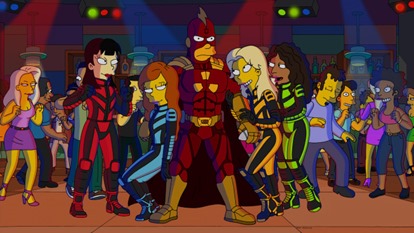 Rob Halford is the lead singer in Judas Priest. Since 1974, the band has been one of heavy metal’s most successful groups, issuing such arena-rocking anthems as “Breaking the Law,” “Living After Midnight” and “You’ve Got Another Thing Coming’.”

Leslie Mann most recently starred in Judd Apatow’s “This Is 40.” She will next be seen in the feature comedy “The Other Woman.” Other movie credits include “Knocked Up,” “The Bling Ring,” “The Change-Up,” “Little Birds,” “Funny People,” “17 Again,” “I Love You Phillip Morris,” “Drillbit Taylor,” “The 40-Year-Old Virgin,” “Orange County,” “Timecode,” “Big Daddy,” “George of the Jungle” and “She’s the One.”

Actor, writer, producer and director Seth Rogen made his co-directorial debut this summer with Evan Goldberg in the comedy, “This Is The End.” In 2012, he co-starred opposite Barbra Streisand in “The Guilt Trip.” In 2011, he starred in and executive-produced the dramatic comedy “50/50.” Other feature credits include “Knocked Up,” “Superbad,” “Pineapple Express,” “The Green Hornet” and “The 40-Year-Old Virgin.” His TV credits include “Undeclared” and “Freaks and Geeks.” Rogen will next be seen opposite Zac Efron and Rose Byrne in “Neighbors,” which he also is producing. He also will be seen with James Franco in “The Interview,” which he is co-writing and co-directing with Goldberg.

Paul Rudd currently co-stars in “Anchorman 2: The Legend Continues,” and recently co-starred in David Gordon Green’s “Prince Avalanche.” He starred opposite Leslie Mann in Judd Apatow’s “This Is 40.” The movie reunited the trio from the award-winning blockbuster “Knocked Up,” with Rudd and Mann reprising their characters from the earlier film. His other film credits include: “Admission,” “Our Idiot Brother,” “I Love You, Man,” “Role Models (co-writer),” “The 40-Year-Old Virgin,” “Wanderlust (producer)” and “Dinner for Schmucks.” On television, Rudd was the co-writer and co-creator of the critically acclaimed series “Party Down.”

The longest-running scripted show in television history, THE SIMPSONS exploded into a cultural phenomenon in 1990 and has remained one of the most groundbreaking and innovative entertainment franchises, recognizable throughout the world. Currently in production on its record-annihilating 25th season, THE SIMPSONS has won 28 Emmy Awards, and was nominated for an Academy Award in 2012 for the theatrical short “The Longest Daycare.” It has been the subject of a hit feature film, created a revolutionary virtual coaster ride at Universal Studios, received a star on The Hollywood Walk of Fame and has been honored with five U.S. postal stamps personally designed by creator Matt Groening. Named the “Best Show of the 20th Century” by Time magazine, THE SIMPSONS was also named "Greatest American Sitcom" by Entertainment Weekly in 2013.

THE SIMPSONS is a Gracie Films Production in association with 20th Century Fox Television. James L. Brooks, Matt Groening and Al Jean are the executive producers. Film Roman, a Starz Media Company, is the animation house.