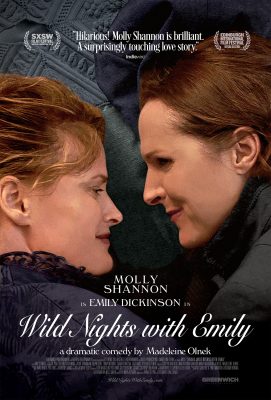 Emily Dickenson’s reputation as a recluse is totally unfounded. Wild Nights with Emily seeks to rectify that situation – it’s a ‘dramatic comedy’ that puts the idea that she was a ‘virginal retiring spinster’ to rest.

Wild Nights with Emily will open on April 12th.

Written and Directed by Madeleine Olnek

Greenwich Entertainment has released the official trailer and key art for the film Wild Nights with Emily, opening in theaters on April 12th!

Opening In Theaters on April 12th!

The poet Emily Dickinson’s persona, long popularized since her death, has been that of a virginal retiring spinster – a delicate wallflower, too sensitive for this world. In this affecting comedy of manners, Molly Shannon captures the vivacious, irreverent side of Emily Dickinson that her literary executors chose to efface – most notably Emily’s lifelong romantic relationship with her sister-in-law Susan.

In quiet mid-19th century Amherst, Emily Dickinson is writing prolifically, baking gingerbread, and enjoying a passionate, if clandestine lesbian affair. While seeking publication of some of her nearly 2,000 poems, Dickinson faces condescending male literary gatekeepers too confused by her genius to take her writing seriously. Eventually, her work attracts the attention of a scheming would-be writer, who also happens to be Emily’s brother’s lover, and sees Emily’s poetry as a vehicle for her own creative ambitions.

Beneath the quips, period fripperies and not so secret trysts is a moving drama of thwarted passion both romantic and artistic that is also a timely critique of how Emily Dickinson’s life was posthumously recast for the genteel sensibilities of her late Victorian readership – a view of her that still dominates today.