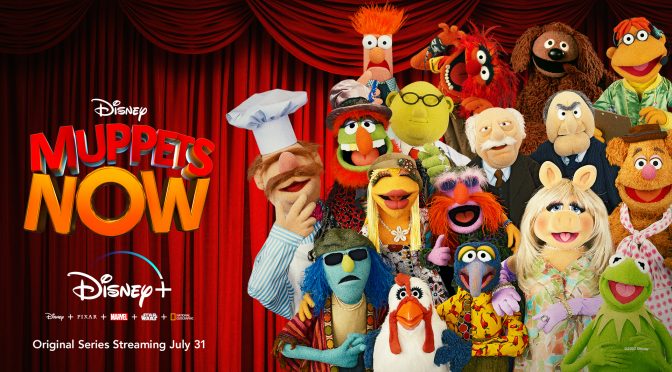 That’s kinda the premise between Disney+’s new series, Muppets Now – featuring a harried Scooter trying to make deadlines in spite of Kermit, Miss Piggy and the rest of the Muppets crew.

The Pig’s Out of the Bag! “Muppets Now” to Premiere July 31 on Disney+

This morning, as part of Disney+’s celebration of National #StreamingDay, Disney+ announced the new original series “Muppets Now” will premiere July 31 on the service. Kermit the Frog, Miss Piggy, and the gang joined in the fun sharing their own unique spin on the series’ original key art:

“Muppets Now” is The Muppets Studio’s first original series for Disney+. In the six-episode season, Scooter rushes to make his delivery deadlines and upload the brand-new Muppet series for streaming. They are due now, and he’ll need to navigate whatever obstacles, distractions, and complications the rest of the Muppet gang throws at him.

Overflowing with spontaneous lunacy, surprising guest stars and more frogs, pigs, bears (and whatevers) than legally allowed, the Muppets cut loose in “Muppets Now” with the kind of startling silliness and heartfelt fun that first made them famous.