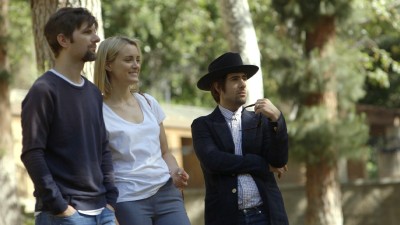 From personal experience, I see that when someone gets married and/or has kids, they wind up gaining a whole new set of friends – people that they might otherwise have never met, or even liked.

When Alex and Emily, a thirtysomething couple with a pre-school aged son, RJ, move from Seattle to Los, RJ makes friends with another boy at a park near their new home. They are approached by the other boy’s father, Kurt (Jason Scwartzman) and find themselves invited to dinner – pizza – that night. Even though they’re not sure what to make of Kurt, with his hipster style and unhipster demeanor, they accept.

Alex (Adam Scott), Emily (Taylor Schilling) and RJ arrive at Kurt’s home to discover his beautiful, charming, French wife, Charlotte ( Judith Godreche) and during dinner learn that Charlotte is teaching their son French, while Kurt is teaching him Spanish – intimidating!!!

But Kurt and Charlotte turn out to be gracious hosts and before long they’ve finished dinner, put the boys to bed – so the adults can continue to get to know each other – and are passing a bong and drinking good wine.

Slowly, the couples open up to each other and a gently mellow mood builds. Then, Kurt takes Adam off to show him his latest art project, while Charlotte and Emily drive off to find some good, expensive hard stuff. Only that’s not really what they’re doing – as a couple of brief sequences suddenly deliver a few genuinely disturbing moments.

Written and directed by Patrick Brice, The Overnight is an exploration of several ideas – like the fact that you have kids does not mean your life is other; you haven’t suddenly gotten old, and are still open to new friends and new experiences. Or, what are your boundaries? Are they practical, theoretical; fixed, or fluid. 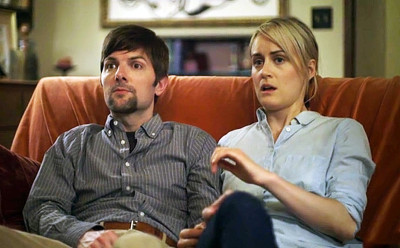 The Overnight has been compared to 1969’s Bob & Carol & Ted & Alice and there are reasons for that – although that film was about a shift in generational mores that was made by the previous generation – who had no idea how to deal with it and, as a result, produced a film that wasn’t 100% inadvertently mawkish and awkward.

Instead, Brice and his cast explore more freely and openly and with considerably more wit. The irony of the film is that, when the boys are asleep, they’re uninhibited; when the boys wake up, then – and only then – do things get awkward.

Brice has assembled a fine cast for The Overnight – Adam Scott, especially, is a standout because he rises to dramatic demands of his role with warmth and generosity. Schilling, Schwartzman and Godreche are equally adept, but Scott – who doesn’t usually get the more dramatic roles – really shines.

The chemistry between the four is – to say the least – explosive. Brice would never have been able to make the film if that wasn’t so.

At under 80 minutes, The Overnight is perhaps just a hair short – we could have maybe used a few more minutes to get to know these four intriguing characters – but by not staying too long, writer/director Brice ensures we leave them thinking well of the experience.