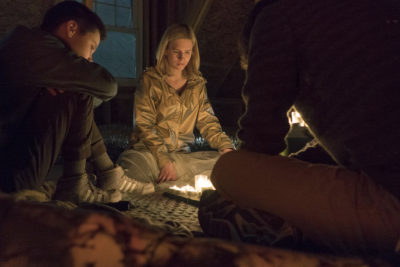 The final teaser clip from Netflix drama, The OA, deepens the mystery of the series. There’s something bad coming, but Prairie Johnson won’t have to face it alone.

The OA premieres on Friday. Check out the new vignette following the jump.

The Netflix original series The OA, which launches this Friday, is from visionaries Brit Marling and Zal Batmanglij (Sound of My Voice, The East), who created and wrote the eight chapter, mind-bending odyssey together. The show begins with a missing blind girl in her twenties, Prairie Johnson (Brit Marling), who comes home to the community she grew up in with her sight restored. Some hail her a miracle, others a dangerous mystery, but Prairie won’t talk about her seven years missing with the FBI or her parents.

Marling stars in the series and Batmanglij directs all episodes. Brad Pitt, Dede Gardner, Jeremy Kleiner and Sarah Esberg from Plan B (Oscar winning producers of 12 Years a Slave) and Michael Sugar from Anonymous Content (True Detective, The Knick) are executive producers of the series, along with Marling and Batmanglij.  The OA is a Netflix production.