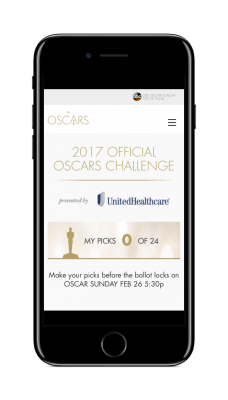 Do you think you know who will win the Oscars®? In all 24 categories?

The Official Oscars® challenge is now live on Oscar.com. You could win a Grand Prize Trip for Two to the 2018 Oscars® Red Carpet Fan Experience – or a three day/two night trip for two to Los Angeles for the  premiere of Disney and Jerry Bruckheimer Films’ Pirates of the Caribbean: Dead Men Tell No Tales.

THE OFFICIAL OSCARS® CHALLENGE IS LIVE ON OSCAR.COM

Movie fans can visit Oscar.com to fill out their official The Oscars® ballot and can also enter The Official Oscars Challenge Sweepstakes for a chance to win a grand-prize trip for two to Hollywood for the 2018 The Oscars Red Carpet fan experience.

The Official Oscars Challenge gives Oscar® fans an opportunity to predict winners in the 24 categories, and also challenge their Facebook friends to play along. Ballots can also be submitted for a chance to win exclusive prizes, including:

Fans can make and edit their picks and enter the sweepstakes up until 5:30 p.m. PST on February 26, 2017. The Official Oscars Challenge sweepstakes is open only to legal residents of the 50 U.S. & D.C., 18 or older. No purchase necessary. For complete official rules and details, click here.

Oscar.com is the official digital destination for all things The Oscars, including the year’s nominees, breaking news, The Official Oscars Challenge and the “The Oscars: All Access,” which is a behind-the-scenes live stream featuring footage from over 20 cameras strategically placed along the red carpet and backstage.

The 89th Oscars will be held on Sunday, February 26, 2017, at the Dolby Theatre® at Hollywood & Highland Center® in Hollywood, and will be broadcast live on the ABC Television Network at 7 p.m. EST/4 p.m. PST. The Oscars, produced by De Luca and Todd and hosted by Jimmy Kimmel, also will be televised in more than 225 countries and territories worldwide. Additionally, “The Oscars: All Access” live stream from the red carpet and backstage will begin at 7 p.m. EST/4 p.m. PST on Oscar.com.