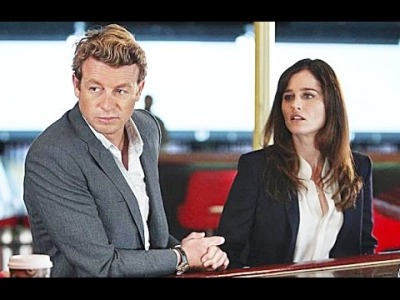 The Mentalist (CBS, Sundays, 9/8C) returns with Patrick Jane and Teresa Lisbon now a couple – though they’re keeping that on the down low at work. Not that they’re fooling anybody – except, possibly, Cho…

There’s not a lot to say about the first three episodes of the sixth and final season of CBS’ reliable procedural, The Mentalist, except to note that the more things change, the more they remain the same. FBI consultant Patrick Jane (Simon Baker) is still suave, charming and delightfully offbeat (the sunny flipside of Sherlock Holmes); FBI Special Agent Teresa Lisbon (Robin Tunney) is still smart, tough and easily exasperated (she lets Jane know that, now that they’re a couple, he can let her in on his plans a whole lot earlier than he used to); their boss, Special Agent in Charge Dennis Abbott (Rockmond Dunbar) is still very much by the book (except when he’s not); Special Agent Kimball Cho (Tim Kang) is still something of a sphinx; and tech guy Jason Wylie (Joe Adler) is still amused/bemused by Jane’s lack of by the bookishness.

There’s a new agent in town – rookie Michelle Vega (Josie Loren), who is as eager as all get out and with that fresh from the academy, procedure/protocol-conscious gleam. Over the first couple of episodes, she gets that gleam dimmed a few lumens but loses none of the eager to get on with it perkiness. Loren is good enough that she never feels too cute to live.

The season premiere, Nothing Ahead But Blue Skies finds Abbott’s team working the murder of an undercover agent who had a line on a gun-running operation – which ties in with a murder from a couple decades earlier. It serves as a fitting warm up for the final season as it allows Jane to be calculatingly rash and seemingly out of control – his ultimate workplace happy place – while introducing the very buttoned down, in control rookie. 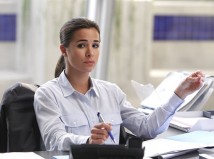 The season’s second episode, The Greybar Hotel, finds Lisbon planted in prison in hopes of getting a woman (Brit Morgan, The Middleman) facing fifty-to-sixty years in prison for grand theft auto to give up the location of her boyfriend – the leader of a high-end car theft ring. This episode showcases Lisbon’s smarts, Jane’s improvisational skills, and has Vega trying to follow protocol.

Finally, in Orange Blossom Ice Cream, Jane and Lisbon have to travel to Beirut to help the CIA apprehend a courier (Mark Ivanir, The Honourable Woman) for terrorist organizations – and brings them back into contact with Erica Flynn (Morena Baccarin, Firefly, Homeland) (the Irene Adler to Jane’s Sherlock Holmes). The wittiest of season six’s first three episodes, Orange Blossom Ice Cream finds Flynn getting under Lisbon’s skin and Jane facing one heckuva job interview.

With thirteen episodes to wrap up the series, The Mentalist clearly has a bang-up conclusion in the works. With the introduction of CIA Agent Danitra Cass (Garcelle Beauvais) in the two of the first three eps, the series is establishing new wrinkles (and characters) that keep a darker undercurrent going in a show that has thrived on the kind of illusion mastered by Jane – sunny skies with that single dark cloud looming just on the fringes.

The Mentalist remains predictable in that we can predict that Jane will do something unpredictable – something that will have us exclaiming (if only to ourselves), ‘of course!’ But only after the episode is over. That the series can still do that after all this time is quite the accomplishment.

I, for one, will miss it when it’s gone.