Sure, unlike on Jaws, the effects a remarkable (The Meg is a $150 million project, after all) achievement – but VFX doesn’t give a film it’s heart.

Not to worry there’s an eight-year old girl (a Good Thing) and a pink-eared puppy (not necessarily) to do that.
Seriously. 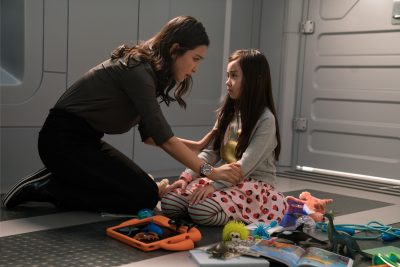 The writing is kind of lazy and while the cast give it a shot, the fact that there are no good lines in head after I left the theater is another bad sign.

The Meg opens with Jonas Taylor (Jason Statham, The Expendables, The Spy) on a mission the save the crew of a submarine crew when something punches a nasty bend in the hull. When he sees what it is, he takes his recovery sub to take up everyone in it – leaving others to die.

It’s a hard choice and he swears off ever doing it again – especially after no one believed his story of encountering a megaladon.
Until an exploratory sub goes deeper than anyone and is attacked by a giant squid and, shortly afterward, The Meg. 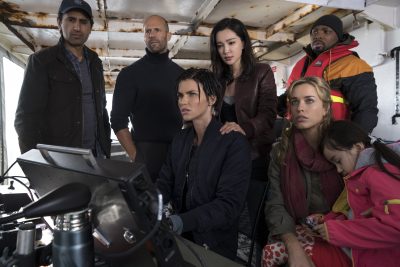 “It certainly doesn’t hurt that the pilot, Lori (Jessica McNamee, Sirens), is Jonas may still have some kind of connection with her.
The rescue attempt is being taken from an ocean research team in an ultra-high-tech station.

Naturally, thanks to complications, when Jonah saves his ex, they are followed a huge shark – a megaladon. And now, the surface world may be in dangerous. 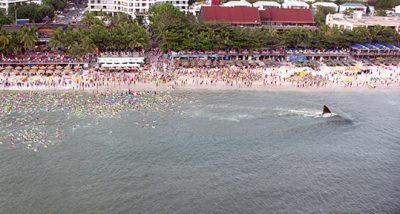 Written by Dean Gregaris, Jon Hoeber, Erich Hoeber and directed by Jon Turteltaub, The Meg made me laugh a couple of time and made me jump once.

The cinematography is mostly lovely, but the editing is so quick (almost ever four to six seconds there’s an edit) that it’s difficult to notice.

Good things about The Meg: Meiyen is believable thanks to Sophi Cai’s curious, energetic presence; although it doesn’t end in a cliched kiss, Statham and Li are very good together, as are Statham and Cai.
Otherwise, The Me lacks any attempt at characterization and seems unsure of its tone – there sequences where it seems like it wants to be a horror movie, and others where it seems to be goofy summer fun.

Instead, it falls somewhere between.