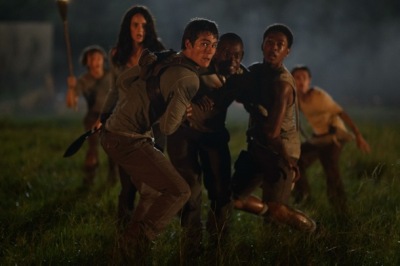 A young man named Thomas wakes up to find himself in an elevator rising to a wild green space and a host of other young men who, like him cannot remember anything about their pasts save for their names. The space is surrounded by titanic walls which open into a maze but no one has any idea why they’re there – and then, for the first time, a young woman arrives, who recognizes Thomas.

Adapted from a bestselling young adult novel by James Dashner, The Maze Runner is, for all its nearly two-hour length, a remarkably compact, fast paced tale that assembles a cast of intriguing characters and efficiently moves them through a hectic series events culminating in (if you haven’t read the book, like me) some astonishing revelations.

For three years, one adolescent boy has appeared in The Glade every month. They have built a primitive, if surprisingly sophisticated living space between a wooded area and what appears to be a meadow. The titanic walls open and close at regular intervals and certain of boys – dubbed Runners – explore the enclosed maze looking for a way out.

The group’s leader, Alby (Aml Ameen, Harry’s Law, The Butler) takes the new greenhorn on a tour of the place and explains the rules (1. Everyone does their part; 2. Never hurt another Glader and 3.No One – except Runners – enters the maze) under which the community operates before handing him off to Newt (Thomas Brodie-Sangster, Game of Thrones), who seems to be second-in-command. During a fighting competition, Gally (Will Poulter, Shameless) dumps the greenhorn to the ground with the result that he remembers his name – Thomas (Dylan O’Brien, Teen Wolf).

One of the things he learns is that no one has ever lasted a night in the maze, so naturally, that’s where he wants to go – despite one of the rules being that no one except Runners are allowed to do that. The problem with the maze – besides the fact that it changes configurations every night – is that creatures that seem to be giant cyborg spiders, called Grievers, come out at night. No one ever lived to describe one, but once Thomas and the lead Runner, Minho (Ki Hong Lee, The Nine Lives of Chloe King) not only survive a night in the maze but kill a Griever, they make a key discovery.

Virtually the next day, the elevator returns way ahead of schedule – with Teresa (Kaya Scodelario, the original British Skins). In her hand is a note that reads, ‘She is the last one ever.’ This time, the elevator stays put – and Teresa proves to be more than the group can cope with until Thomas talks her down, literally…

Director Wes Ball takes a script – by Noah Oppenheim, Grant Pierce Myers and T.S. Nowlin – that is more efficient than brilliant and directs it pretty much the same way. The maze visual effects are pretty impressive and the Grievers are cool/grotesque. Where The Maze Runner is most impressive, though, is in its young cast – taking what is basically a low budget potential franchise and making us care about characters who are not particularly well (or particularly poorly) written.

The final moments set up the potential sequel pretty well, bolstered (again) by a terrific performance – this time from Patricia Clarkson. Her appearance gives heft to two recurring lines from the film, ‘Wicked is good,’ and ‘Everything is going to change.’ By the time the end credits rolled I was ready for part two – I hope it happens.

No Big Drink Scale this time – I only had the medium – but I still had some of that left at The Maze Runner’s conclusion, so it definitely held my attention and kept me emotionally involved.