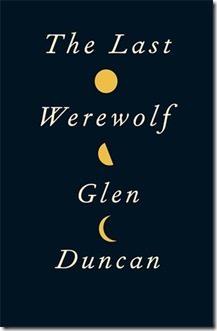 Everywhere you look on the literary landscape you can see vampires, zombies, trolls and many other creatures of the paranormal persuasion. Well, except for the werewolf. Now, British author Glen Duncan has, for reasons unknown, decided that the world needs a werewolf novel. Duncan, deemed ‘one of Britain’s best young authors,’ by The Times Literary Supplement [London], does give The Last Werewolf’ literary flair, but he sticks to the age old conventions of the genre and pokes holes in them from within.

‘It’s official,’ Harley said. ‘They killed the Berliner two nights ago. You’re the last,’ Then after a pause, ‘I’m sorry.’

Jake Marlowe is two hundred and one years old and has been a werewolf since his twenties. His reaction to this announcement? More ‘Huh…’ than Yikes!’ Jake, you see, has gotten over/past/through the excitement/horror/disgust of being a werewolf and is now rather bored by the whole thing.

Harley, the elderly gentleman who makes the announcement, works for the World Organization for Control of Occult Phenomena [WOCOP for short], so his information is accurate. He is baffled by Jake’s utter indifference – and further dismayed that Jake plans to give himself up for execution at the next full moon.

After a number of odd events – some feeling very James Bond-ish; some like the best horror movies you’ve ever seen – things suddenly change. Once they do, and Jake makes the decision to live, the already fast-paced novel shifts into overdrive – culminating in a sequence of events that defiantly echo one of Jake’s favorite sayings, variations on ‘God being dead, irony being rollickingly alive.’

Duncan is a very literary writer and he brings an elegance to The Last Werewolf that both counterpoints and sets up the book’s horrors. He’s as capable of baroque prose as Michael Moorcock as he is of Hemingway-esque pithiness.

After letting the wolf take over on a full moon, Marlowe simply states, ‘Reader I ate him.’ Yet, in other situations, he is not afraid to bring out the occasional compound-complex sentence. What makes the novel work is a combination of detail and character and knowing when to talk and when to shut the hell up.

Duncan’s literary approach to the werewolf story gives extra dimension to the horrors/pleasures of killing and feeding and the pleasures/horrors of lovemaking – both of which he describes in detail that lurks just around the corner from profundity.

The Last Werewolf is not the typical beach read, though it would make a good one, just so long as you take care to renew your sunscreen because, once you get started, you are not going to want to move until you’ve finished – and you wouldn’t want to get a sunburn…