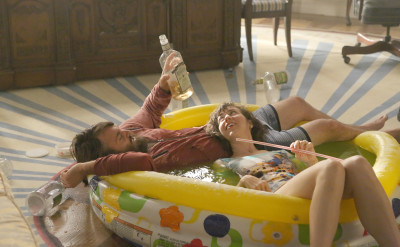 In its second season premiere, The Last Man on Earth (Sundays, 9:30/8:30C) wastes no name in establishing its unique position as FOX’s oddest series.

Following Phil’s banishment from Tucson, he and Carol take up residence in a rather famous abode in Washington, DC and use a stealth bomber to go shopping. If anything signals to the show’s audience that it’s going continue not being a standard sitcom, that would certainly do it.

In Is Anybody Out There?, Phil (Will Forte) begins to find Carol’s (Kristen Schaal) constant declarations that wherever they stay doesn’t feel like home a bit frustrating – especially when he arrives at the conclusion that Tucson is the place that now feels like home to her.

Events are set in motion that once again leave Phil in an uncomfortable situation – and, in a weirdly poignant parallel of those events in Phil’s life, his brother (Jason Sudeikis) has a moment that results in his echoing a line of Phil’s.

The last Man on Earth is tough to review without giving away spoilers – it seems the whole ep is full of typical moments for the series which, of course, would be highly atypical anywhere else.

The main thing about the show is that it does things you won’t expect – even if you’ve watched every episode until now. The writing is deliriously offbeat and, frequently, weird – and, if anything, the weirder it gets, the more endearing it becomes.

Is Anybody Out There? Reinforces the show’s refusal to be anything other than what it is. In that, it echoes other unique shows (like Archer or American Horror Story). If formula is your enemy, then The Last Man on Earth is your show.