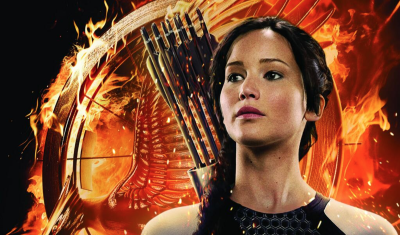 I won’t lie; I walked into The Hunger Games: Mockingjay Part 1 knowing that I would hate it. I liked the first two films well enough, but really don’t like Katniss (Jennifer Lawrence) and I’m sorry but I’m sick to death of watching movies that don’t seem to end. I miss the days when movies had clear beginnings, middles and endings. I don’t want to wait 4 or 5 years to get a complete story because frankly, by the time it concludes, I just don’t give a crap anymore. Can anyone tell me what’s going on in The Hobbit movies?

Katniss is a fairly selfish heroine. In four films the only truly selfless thing she’s done is volunteer to take her sister’s place in the Hunger Games. Yes, a very noble act, however, most of her actions since then have been fairly “selfish” and just about her own survival. A sentiment I certainly relate to, but she’s not proactive in trying to stay alive her “super power” is to sit around, mope and avoid interacting with people until she absolutely have to.

Yes, a legitimate argument that can be made that she forms some connections with other tributes during the games, notably her fellow tribute Peeta (Josh Hutcherson) and the little girl during the first games, but it seems like those moments are few and far between.

Due to her rebellious actions in the first two games, unbeknownst to Katniss, she becomes a symbol of a rebellion against the Capitol. So once again we’re forced to spend another 2 ½ hours with someone who doesn’t want to be in the situation she’s in. We’re three movies into this stupid story, yet it feels like we’re being re-introduced to the main character and expected to feel sorry for her. At some point she needs to grow up and take some responsibility.

Again, I can sympathize with her, but as someone watching a MOVIE about this character, I want something to actually HAPPEN. I get she doesn’t want to be the public face of a rebellion that she didn’t believe in, but for god sake woman, do something, be proactive. Stop MOPING.

I would go into the plot or even talk about some of the new characters introduced like the inclusion of one of my favorite actresses Julianne Moore as District 13 President and rebel leader President Alma Coin, or Katniss’ documentary film crew that includes Natalie Dormer as her director Cressida. But really, nothing much happens in this film and the new characters don’t serve much point. Coin spends most of the film talking about Katniss as though she’s not even in the room and the rest of the time begging her to be the public face of the rebellion.

This is why you don’t take a 300 page book and turn it into two films. The Hobbit has the same issue. It feels like the entire movie is just unnecessary filler.

The Hunger Games: Mockingjay Pt 1 spends an inordinate amount of time teaching Katniss about the importance of propaganda. Really? If I wanted to learn about propaganda film-making I’d watch a documentary on Leni Riefenstahl – don’t be shocked that I actually know my film history!

I really want to hate this film, but it’s so lifeless and passionless that I find it hard to generate that kind of emotion for this limp noodle.