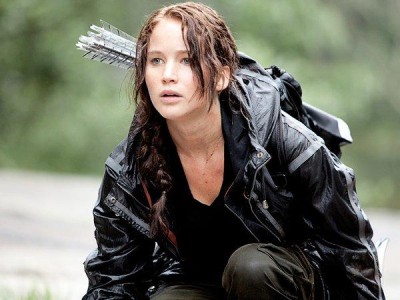 Suzanne Collins popular trilogy The Hunger Games took the book world by storm and now its about to set the movie world on fire.  Today’s teenagers read and go to the movies so it’s a match made in Hollywood blockbuster heaven. This movie can best be described simply as The Running Man for teenage set.  The Running Man is a great movie so being compared to it is not a bad thing.

As someone who has not read the books the movie does a great job of setting up its world and rules within the first few minutes. Really, a lot of movies should take note, all we need is a simple title crawl at the beginning and we’re off to the races. Apparently the world was at war, lots of death and destruction. To end the war Powers that Be launched The Hunger Games.  Instead of endless war each city (known as districts) on the planet have to offer two tributes to participate in the game to the death.  The winner gets riches beyond their wildest dreams.

The world Director Gary Ross crafted feels sterile and flat.  The color palette is a bit boring, but then this is a dystopian future so I don’t expect bright happy colors.

The world of The Hunger Games is a dark, dreary future where the rich have everything and the poor have nothing and have to fight every day to survive. Sort of like the real world. Only here, the tributes are between the age of 13 and 18 and chosen at random.

Katniss Everdeen ( Jennifer Lawrence) is forced to volunteer when her younger sister is chosen to participate. The movie is told from her viewpoint and it suffers for it. We don’t learn much about the other characters and for the first hour we never get much of a sense of what she’s thinking or feeling.  Lawrence is a star and she carries most of this movie.

Unfortunately at times it felt like she was in her own film, she had no chemistry with anyone in this, especially Josh Hutcherson who plays her fellow District 12 tribute Peeta Mellark.  I get that Peeta is scared and doesn’t think he’ll survive the games, but the way Josh plays him just doesn’t work.  I really like the rest of the cast Stanley Tucci as a commentator and Wes Bentley are great. Woody Harrelson as the mentor and Donald Sutherland as President also works really well.

Book author Suzanne Collins was very involved in the screenplay and the movie feels like watching a book, but somehow it still didn’t properly build the characters, the tone of the piece feels right and there’s enough meat here to make me want to see where this goes. But the pacing is painfully slow and spends the first hour or so setting up the games. The movie explains everything in the first three minutes; I did not need another hour of set up. Get to the games already.

The real issue with this movie is Gary Ross. He clearly does not have enough faith in the material or the world he created to simply let the audience enjoy the ride. He inserts himself into every second of this movie. Truly, I think this is one of the worst uses of Camera movement that I’ve ever seen in a professional, Hollywood movie.  I would expect this from a new Director who wants to make a name for himself, but this is a veteran who has done work (Seabiscuit, Pleasentville, Dave, etc) that I’ve liked a lot in the past. This movie he is experimenting with a completely new “modern” style. I think he’s trying to go for a “found footage” thing to give the movie a sense of “realism,” and it doesn’t work AT ALL.

Every shot and scene consists of shaky cam, fast pans and sweeps, and out of focus zoom.  Are you kidding me? Ross did not have a camera that is capable of maintaining proper focus while zooming in and out? Even in the quiet scenes the camera wobbles. This movie literally made me sick. About 70 minutes into it, I gave up and left the theater. I’m down for this ride, just not with this director or movie. As an advertising for the book it works well, as a movie it fails.

21 thoughts on “The Hunger Games – Michelle Hates It!”