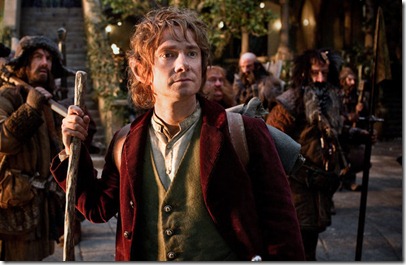 Peter Jackson’s The Hobbit: An Unexpected Journey melds the slender Tolkien children’s novel and material from the appendices of The Lord of the Rings to create a movie that is not quite as dark as his brilliant LOTR Trilogy, or anywhere near as whimsically delightful as The Hobbit, Or There and Back Again. It comes across as LOTR Lite.

The opening sequences of The Hobbit frame the backstory to the dwarven quest into which young hobbit, Bilbo Baggins (Martin Freeman) is drafted – the fall of the dwarven city of Erabor to the dragon Smaug – and framing device of the new trilogy: the older Bilbo (Ian Holm) deciding to write the memoir of his big adventure.

The destruction of Erabor is a massive CGI set piece that reminds of LOTR, while the sequence in The Shire is almost as whimsical as you might expect, with Frodo (Elijah Wood) rushing off to meet Gandalf (Ian McKellen) as Bilbo putters about in his hobbit hole – and then, he begins to write, “In a hole in the ground there lived a hobbit…” and we see the younger Bilbo being approaching by Gandalf the Grey on the matter of an adventure.

Before you know it, Bilbo’s comfortable home is filled with dwarves – thirteen of them (don’t worry if you can’t remember them all – you’ll be doing well to remember more than a handful when the movie is over) – who turn his cozy home into a wacky dinner party then present him with a contract to become the group’s burglar (Gandalf’s idea, naturally). The most memorable of the company are Thorin Oakenshield (Richard Armitage), the grandson of the last king of Erabor, and Bofur (James Nesbitt), the most working class dwarf. 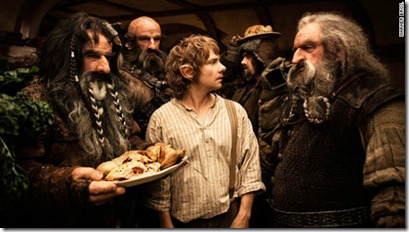 And there ends the bulk of the whimsy – except for the sequence of events that introduces Radagast the Brown (Sylvester McCoy, best known for being the seventh Doctor on Doctor Who), a seemingly off-his-nut loner who lives in the wild (which is rapidly becoming known as the Mirkwood) and has learned of the advent of a mysterious entity he calls the Necromancer.

Then there are orcs – and a Keystone Kops chase sequence that finds the orcs being everywhere the dwarfish company runs. It’s a bit of silliness that seems at odds with the LOTR-ishness that Jackson is trying to build – as are three trolls who come off as an epicurean Three Stooges – and some other gags that feel very anachronistic (‘You have got to be joking!’).

Throughout, the movie flips from really, really serious to daffy to not-quite-whimsical in the strangest places and, such is Jackson’s command of his craft, it almost works most of the time. In fact, The Hobbit is a pretty fun ride for the most part.

The CGI are superb, and nowhere is this more apparent in Bilbo’s meeting with Gollum (Andy Serkis), the pasty, emaciated creature we remember from the LOTR Trilogy. Here, he is sixty years younger Serkis so totally inhabits the role that the Bilbo/Gollum encounter is the most memorable sequence in the film. The dual sides of Gollum’s personality – and Bilbo’s consternation combine to create the most effective use of CGI, emotionally, that has ever been put on film.

There’s also a stop at Rivendell, as Gandalf seeks aid from the elves – despite Thorin’s opposition – and Gandalf gains an unspoken ally in Galadriel (Cate Blanchett).

Mostly, though, The Hobbit takes almost three hours to cover what amounts to a third of an eighteen-chapter book and even with the inclusion of that material from the LOTR appendices, it’s a good half-hour too long. Outside of the fall of Erabor, the big CG battle sequences, impressive though they are to watch in the moment, could be cut down considerably – and some of the chases (especially the Radagast/orcs sequence) could have been dispensed with entirely without hurting the movie.

Using the Big Drink Scale, I finished my drink about twenty minutes before the (fifteen minutes of) credits began to roll. That didn’t happen with any of the LOTR movies.