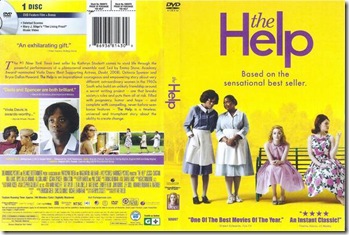 First-time director Tate Taylor, working from his own screenplay, makes a pretty big splash with The Help. Since I haven’t read Kathryn Stockett’s novel, I can’t say how faithful the movie is, but I can say that it will make you laugh and cry – and you will not believe that its running time is almost two-and-a-half hours.

The DVD release prompts me to do something I’ve not done before – raise a movie’s grade [from A to A+].

Frankly, the DVD would be better without these extra features – the film’s grade would then be the DVD’s grade. Instead, by giving us this abysmally small selection, the resultant package becomes far less than the sum of its parts – and deprives everyone who hasn’t upgraded to Blu-ray [which would still be the majority of home video buyers!] absolutely no insight into the challenges of translating the bestselling novel into the hit movie.