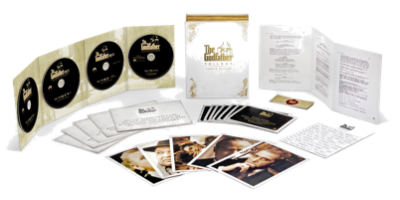 Francis Ford Coppola’s The Godfather is considered to be one of the most influential films ever made.

To celebrate the film’s 45th Anniversary, Paramount Home Media Distribution is releasing the entire trilogy on Blu-ray as The Godfather: Omerta Edition.

The four-disc set includes commentary by Coppola on all three films, a full disc of previously released in-depth special features, as well as exclusive new collectible Trivia Cards, Magnetic Poetry, an Anatomy of a Scene fold out and Quote Cards.

The Godfather: Omerta Edition will be in stores on November 7th.

A stunning gift for any fan, only 45,000 of these limited edition, numbered sets will be made available beginning November 7, 2017.  THE GODFATHER TRILOGY: OMERTÀ EDITION includes commentary by Coppola on all three films, a full disc of previously released in-depth special features, as well as exclusive new collectible Trivia Cards, Magnetic Poetry, an Anatomy of a Scene fold out and Quote Cards.