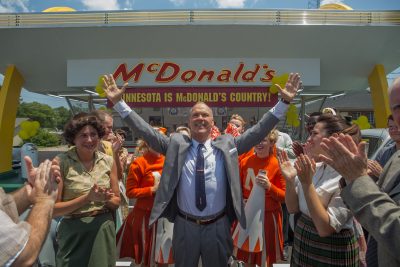 The Founder is the true story of how a persistent salesman talked two brothers with a unique way of selling burgers, fries, shakes and sodas into going bigger – then ditched them and became a rich man.

That unique way of selling burgers was the assembly line method that McDonald’s still uses today.

The Founder opens with Ray Kroc (Michael Keaton) pitching a five-mixer milkshake maker to someone who doesn’t have his vision. We see this happen several times – enough to establish that Ray is both talented and persistent but might just have the wrong product. Until, that is, a little burger joint in San Bernadino, California orders six of them. 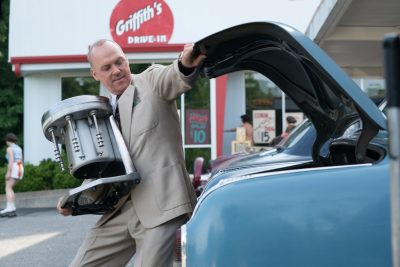 Intrigued, he visits the restaurant – McDonald’s – and meets brothers Mac (John Carroll Lynch) and Dick (Nick Offerman) McDonald who own it. Realising that he could be onto a good thing, he persuades the two to let him franchise their speedy method and name.

It takes a while for things to click, but Ray’s persistence wins out and things begin to cook in the monetary sense – for everyone but Ray, who signed a contract that’s problematic.

A chance encounter changes his focus in a crucial way – he begins to buy the land future franchises will be built on and leases it to franchisees. If they don’t keep up the standards he sets, he can cancel their lease. This also gives him leverage against the brothers.

Written by Robert Siegel and directed by John Lee Hancock, The Founder depicts Ray as a smart, driven hustler – a guy who, given an opportunity, will seize it with both hands. If anyone gets in his way – like the actual creators of the concept he wants to take nationally – well, that’s just too bad. 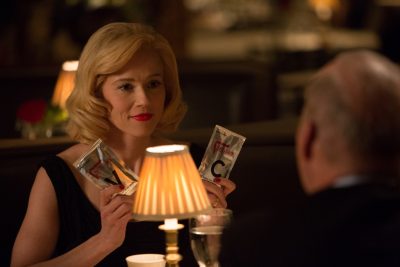 When he meets June Smith (Linda Cardellini) – the wife of Rollie Smith (Patrick Wilson), a future franchisee – Ray is drawn to her ambition as much as to her beauty. The next thing you know, he’s telling wife Ethel (Laura Dern) he wants a divorce.

While Lynch, Offerman, Cardellini and Dern are all excellent, The Founder is Keaton’s movie. He makes Ray someone we can at least sympathize with as he struggles to fulfill his ambitions – at least before he shows the depths of his ambition and his lack of empathy.

There are pieces out there that go into much greater detail on the subject of Ray’s nature and behavior, but Siegel and Hancock wisely stick to the throughline of his growth of McDonald’s – and the treatment of those were key parts of that arc.

Ray might not have been a very nice guy, but the story of how he leveraged a single burger joint into a global company is a fascinating one.