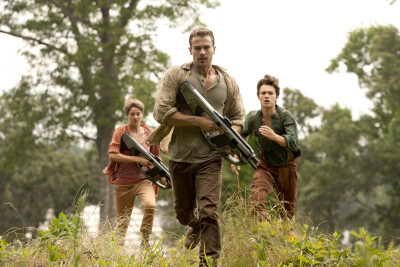 Following their thwarting of Jeanine’s (Winslet) efforts to eradicate the Abegnation faction, Tris (Woodley), Four (James), Peter (Miles Teller) and the survivors from Dauntless (at least the ones that didn’t defect to become soldiers for Jeanine) are hiding out in Amity, where their efforts to be peaceful aren’t entirely successful – much to the discomfort of faction leader Johanna (Octavia Spencer).

Before they can leave, however, Jeanine has her minions begin a search for any and all Divergents – and an armed convoy invades Amity (as well as, we can assume, the other factions), forcing them to try to escape after Peter, the weasel, alerts the guards to their presence.

Tris, Four and Caleb (Ansel Elgort) manage to hop a train before the guards, led by Eric (Jai Courtney), can catch them but wind up in the midst of a horde of Factionless. After a bit of a brawl, Four reveals his former name and suddenly the Factionless are taking the three to their lair where me meet their leader – Four’s mother, Evelyn (Naomi Watts).

She proposes an alliance between Dauntless and the Factionless to overthrow Jeanine, but Four isn’t having any of that. 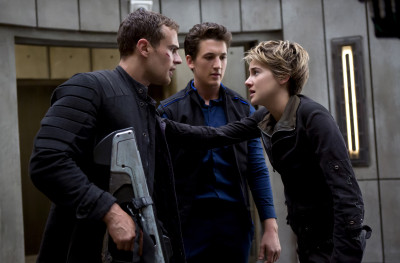 What with one thing and another, Tris winds up in Jeanine’s clutches (as we see in the trailers and TV spots that are out there) and is put through sims from all five Factions for purposes that I won’t disclose here. The CG sims that Tris must face are impressive. Full credit has to be given for their design and execution.

At twenty minutes shorter than Divergent, Insurgent fair flies by. Robert Schwentke (RED, Flightplan) directs with as much pace and muscle as he can, but – as is inevitable when translating a hefty novel to a two-hour movie) – there are moments that feel far too arbitrary and moments that could have used more clarification for those of us who haven’t read said hefty novel.

Overall, though, Insurgent is a reasonably solid second chapter. The script – by Brian Duffield (Jane Got a Gun), Akiva Goldsman (A Beautiful Man, Fringe) and Mark Bomback (Dawn of the Planet of the Apes) – allows for each of the major players to have a few great moments and, mostly, avoids seeming too arbitrary.

The biggest problem, for me at least, is that there is so little humor. Everyone except Teller’s Peter is so dour and grim. Teller steals every scene he’s in – Peter seems to the only one who is having any fun.

That’s not to say that the cast isn’t terrific – it’s just that they aren’t given a huge range to exploit, emotionally. As a result, Insurgent does suffer in comparison with, for instance, The Hunger Games: Catching Fire. It’s still a good ride, but a bit more humor might have made it a great one.