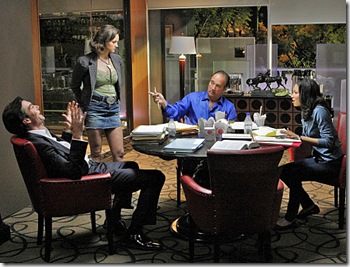 The Defenders [CBS, Wednesdays, 10/9C] turns out not to be a re-imagining of a 1961 legal series about a couple of lawyers who didn’t always win [which was groundbreaking stuff in 1961]. Instead, it’s a fictionalization of a couple of Vegas lawyers with a reputation for trying anything to win, and partying like it’s 1999 when they’re not actively working.

The premiere opens with Pete Kaczmarek [Jerry O’Connell] bidding a flight attendant goodbye as she rushes off to get to her next flight [her parting words are our headline] – and then passing off his firm’s newest associate, Lisa Tyler [Jurnee Smollett] as a new judge to take a shortcut to the first client of the day – pausing briefly to introduce her to the ADA [Natalie Zea] who will be prosecuting the case. From there, he’s off to haul his partner, Nick Morelli [Jim Belushi] out of a bar, where he’s been examining photos of his separated wife and someone he’s sure she’s having an affair with.

Their harried receptionist, Zoe [Tanya Fischer], wears cleavage revealing clothes and three colors of eye shadow. She sounds like an import for from some nebulous mix of Jersey and the Bronx. One of the things that she finds most vexatious is that Pete wants tickets to a Frank Sinatra Jr. concert and they just aren’t there to found [this ties into the arc involving Nick’s future ex]. One of their associates, Clyde [Bruce Jarchnow], is “the best adult entertainment lawyer in town.”

At this point, I’m considering just turning of my DVD player, but I decide that these two less than wonderful guys might be different inside the courtroom. I’m not altogether wrong – but I’m not right, either.

Their first case is a kidnapping charge, but it’s Dan Shepherd – charged with murder – who pulls Nick out of his drunken state. Shepherd was going to take a plea, but since his actions were against three guys who almost beat his brother to death, he’s decided to go to trial. And when testimony is given about the trajectory of the bullet, Nick pulls a stunt with a glass of water – inspired by something he sees when he’s watching a baseball game on TV with his son. It’s not the first unorthodox move in the case and it won’t be the last.

Then there’s the arc with Lisa, who tears a strip off Pete for leaving her to handle Raymond, the alleged kidnapper’s plea – and Pete response, just before he puts her to work on the Shepherd case and she finds something everyone else had missed in a witness’ deposition.

Adding to the twists in the case, the presiding judge is played by Stephen Root [Office Space, NewsRadio] and he’s not your average justice. By now, I’m thinking that things are getting to be a bit much – but fair is fair, and I soldier on. Then I see how Pete negotiates a plea for Raymond, the alleged kidnapper. Yikes!

I have to say that, based on the premiere, I might occasionally check in on The Defenders if there’s nothing else on. Judging by the premiere [sorry – it was there], the writers [in this case, Kevin Kennedy and Niels Mueller] are not nearly as clever, or witty, as they think they are. The pilot feels forced – like they were thinking, it’s Vegas; we’ve gotta make it BIG!

That I made it through the ep I credit to director Davis Guggenheim [Deadwood, Waiting for Superman]. It’s not just that he keeps things humming along – it’s that he manages to make these characters come across as more than the collection of oddities that they are on paper. Somehow, he makes connections that shouldn’t really exist.

Plus, there’s the fact that Belushi and O’Connell are likable and charismatic guys – and The Defenders is, in no way, as bad as the deplorable According to Jim [and talk about damning with faint praise].