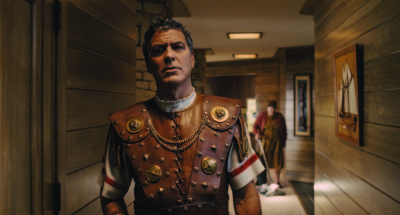 The Coen Brothers’ love of movies – especially, in this case, movies of the fifties – has never been in greater display than in Hail, Caesar. As the film follows Capitol Films’ Head of Physical Production, Eddie Mannix, through twenty-fours of doing his job (he fixes problems that the studio’s actors create) we are taken through four very clever pastiches.

The problem with Hail, Caesar is that, if you’re not an avid fan of films from 65 years ago, you will probably miss out on over half the movie.

Mannix (Josh Brolin) starts his day at 5am and, on this day, works through the night. He has to deal with problems big and small – Esther Williams clone DeeAnna Moran (Scarlett Johansson), currently filming a water ballet film, is growing out of her mermaid costume because she’s pregnant (a problem because she’s unmarried); singing cowboy Hobie Doyle (Alden Ehrenreich) has been pegged to fill the lead in a drawing-room drama but his lack of sophistication is driving director Laurence Laurentz (Ralph Fiennes) crazy; and identical twin gossip columnists Thora and Thessaly Thacker (Tilda Swinton) are pestering Eddie about a juicy story on the studio’s biggest star, Baird Whitlock (George Clooney) – among other more or less trivial problems. 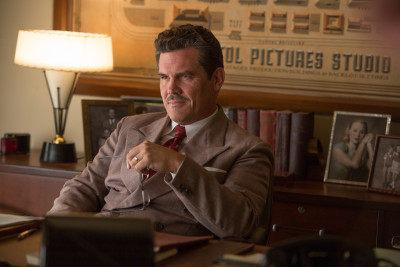 A big problem arises when Whitlock is kidnapped for a $100,000 ransom by a group of communist writers – who bemoan the fact that the studios make big bucks from their ideas while paying them a pittance.

Before he goes to work each day, Mannix visits his parish priest for confession – usually for lying to his wife about quitting smoking.

As it happens, there was a real Eddie Mannix who was a real studio fixer. Somehow, though, I strongly doubt he was as good-hearted a fellow as the Coen Brothers version, who works his butt of doing the right thing for everyone else, including the twin terrors of gossip – even his priest is appalled by his regular visits to confession for such a slight sin.

As far as a plot goes, that’s about it.

Where Hail, Caesar excels is in the details – the various movies being made are perfectly done (the resolution of Hobie’s diction problems solved ingeniously; a musical song and dance sequence featuring Channing Tatum suggests he’d have been a star in ear of film) and the cast are clearly having as much performing as the Coens had writing and directing the film. 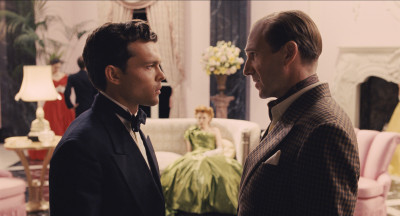 It’s fairly easy to recognise the characters, too, but again, only if you’re a real fan of old movies (Hobie is Gene Autry, the Thacker twins are variations on Hedda Hopper, a character in the western pastiche seems to be a combination of Walter Brennan, Gabby Hayes and Jack Elam, and so on…).

Hail, Caesar is rife with high quality cameos from talented actors who are given the opportunity to just let loose and have fun. Some of the more memorable ones include Jonah Hill as a legal eagle/professional person; Frances McDormand as the studio’s ace film editor, C.C. Calhoun; Christopher Lambert as the director of the musical, and Seinfeld’s Wayne Knight as a ‘lurking extra – and that’s just for starters.

The Coens direct their script with an eye for detail and a wicked sense of mischief. The plot, such as it is, exists to string together a host of great scenes – it’s almost a sketch show, but with more chutzpah than most.

If you love Coen Brother movies and have an appreciation for older movies, Hail, Caesar will be a demented delight.