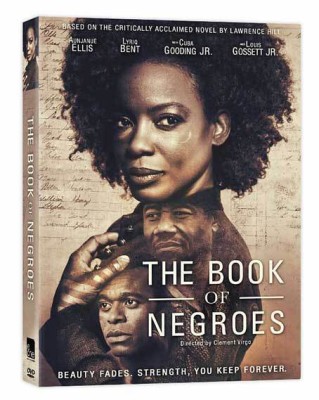 The Book of Negroes opens with a dignified back woman (Aunjanue Ellis, NCIS: Los Angeles, The Mentalist) entering the Houses of Parliament in London and addressing a group of men. ‘I seem to have trouble dying. By all accounts, I should not have lived this long. I am Aminata Diallo, daughter of Mamdu Diallo and Sira (indecipherable). I was born in a village called Bayo, in what you call Guinea. I knew from a young age that I would be a djeli – a storyteller; that I would see and I would remember…’ and she begins her story.

When we first meet young Aminata (Shailyn Pierre-Dixon), she’s an eleven-year old girl who travels with her mother, Sira (Thishiwe Ziqubu) to other villages to help ‘catch babies.’ Her father, Mamadu (Andile Gumbi) is jeweler who has converted to Muslim and has begun teaching Aminata to read Arabic.

As the three of them are returning to their village of Bayo, after Fanta has caught a baby, they are ambushed and Aminata’s parents are killed. She is taken to become a slave. On the long walk to the sea, Chekura (Siya Xaba) a boy who works with the slavers shows her kindness – a kindness that gets him thrown in the boat with the rest of the slaves going to South Carolina. There she and Chekura are separated and sold – she for five pounds to Robinson Appleby (Greg Bryk, XIII: The Series, Bitten).

Even before she leaves Africa, Aminata suffers – she is whipped for trying to pray and branded before she even boards the salvers’ vessel. On Appleby’s plantation, is not treated too badly because she falls under the protective wing of Georgia (Sandra Caldwell, Shall We Dance), but even then she barely makes to adulthood before Appleby rapes her out of jealousy – she’d been reunited briefly with Chekura (Lyriq Bent, Rookie Blue).

She gives birth to Chekura’s baby, but Appleby sells the baby, again out of jealousy, and then sells her to the Jewish Solomon Lindo (Allan Hawco, The Doyle Republic), who with his wife, treats her almost as an equal before losing his wife and son to cholera. Aminata accompanies Lindo on a business trip to New York, where she meets free black tavern owner Sam Fraunces (Cuba Gooding Jr., American Gangster, Forever). While in New York, the Revolutionary War breaks out and she hides in Canvas Town – a slum populated by free blacks and runaway slaves.

When the British promise freedom to any black who serves a year in the British Army, Chekura and others join up. When things go badly for the British, black loyalists are evacuated to Nova Scotia before, eventually, setting out to start a colony in Sierra Leone.

At this point, Col. John Clarkson (Ben Chaplin, Cinderella, World Without End), a staunch abolitionist, plays a large role – as the man who is put in charge of the evacuation from New York and the eventual move to Sierra Leone.

As a Canadian, I was unaware of there being a slave trade in Canada – mostly semi-dignified by the concept of indentured servitude, but still, slavery. I had no idea that there were blacks who fought on the side of the British during the Revolutionary War, either – or of their transplanting to Nova Scotia.

Then there’s the book itself – an actual historical document used for the purpose shown in the series. It is a record of those black loyalists who moved to Nova Scotia – proof of their existence and, as seen by the times in which they lived, their value in monetary terms.

The Book of Negroes is probably going to be as important to our century as Alex Hailey’s Roots was to the twentieth century. It uses a singular character through whom an important part of American, Canadian and British history is seen.

That the character is a woman – and therefore especially of no consequence to most men of that time – makes her strength of will and purpose, and clarity of vision, far more hard hitting than any other possible character living through these events.

The screenplay, adapted from Lawrence Hill’s novel by him and Clement Virgo (The Wire, ReGenesis), is extremely well written. It captures individuals of the period in unique ways and gives Aminata a singular voice. Even though other characters might see themselves in certain lights, when they encounter her, she them as they are – and they do, as well, because of her.

With all the important historical events that occur during the series, it’s important to note that The Book of Negroes is also an epic love story – Aminata and Chekura may be separated for long periods of time but their love endures. In their own ways, both Appleby and Lindo love Aminata, too – though to greatly differing effects.

Filmed in the Canadian province of Nova Scotia (no mistaking those winter scenes!) and South Africa, The Book of Negroes has a very authentic look. The cinematography, by Giulio Biccari, captures both the heated opulence of the South Carolina plantations and the bitterness of the Canadian winter; he gets the need to be both epic and intimate.

Virgo, who directed the entire mini-series, makes the most of his locations; coaxes terrific performances from his cast and never lets the pace to overwhelm the storytelling (or vice-versa).

Disc One: Amistad (a brief featurette on the ship used as three different vessels during filming); The Black Loyalists Historical Society

Disc Two: Over half an hour of deleted scenes

Grade: The Book of Negroes: A+