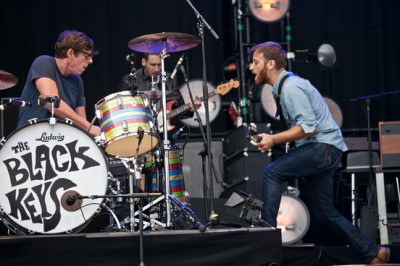 The Black Keys will embark on an extensive North American tour this fall. Promoted exclusively by Live Nation, the tour begins Sept. 5 in Columbus and runs through December, with dates at Toronto’s Air Canada Centre, Brooklyn’s Barclays Center, Nashville’s Bridgestone Arena and Washington’s Verizon Center, among others. Complete worldwide tour details to follow. Pre-sale tickets will be available beginning Tuesday, May 13 at 10 a.m. local time to all fans pre-ordering the album at www.theblackkeys.com and to Citi® cardmembers in the U.S. through Citi’s Private Pass® Program (www.citiprivatepass.com). Tickets go on sale to the general public starting Friday, May 16 at 10 a.m. local time.

The tour supports the duo’s highly anticipated new album, Turn Blue, which will be released May 13 on Nonesuch Records and is now streaming exclusively on iTunes. In celebration of the release, the band will return to Saturday Night Live for their third musical guest appearance this Saturday, May 10.

Produced by Danger Mouse, Dan Auerbach and Patrick Carney, Turn Blue comprises 11 new tracks, including the first single, “Fever,” which is currently #1 on AAA radio for the fourth straight week and #2 on Alternative radio. Additionally, the album’s title track recently premiered on Carney’s SiriusXM show, Serious Boredom, and can be heard here. Both songs are available as free instant downloads with album preorders at theblackkeys.com/turnblue; the LP, CD or digital versionmay also be ordered as part of ticket and t-shirt bundles at the band’s site. The songs are also on sale—alone or as free instant downloads with album preorders—on iTunes.